WE GOTTA MOVE THESE REFRIGERATORS 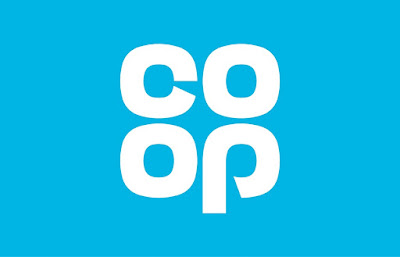 Last month, the Co-Op, as no-one ever called it “The Co-Operative,” began returning to its original 1968-93 “cloverleaf” logo, and I approve of this very much.
The reason for the new-old look is to recapture the image of a strong, ethically-minded group of services owned by its customers, moving on from the issues that plagued its bank, and providing focus at a time when Co-Op innovations, such as the traffic light food labelling system, and the selling of Fairtrade products, are now expected from all retailers. When the John Lewis Partnership is doing as well as ever, selling the benefits of your business to your customer, and hope in an ideal form of business, is more important than ever.
The Co-Op logo is a stout stamp of confidence that, in these times, fits within the space of an app icon on a phone, looks unlike anything else out there and, most usefully, can be spotted from a mile away. It is inextricably linked with what the business stands for that nothing else can possibly work. The design agency North, responsible for the revamp, were sensible in using an identity that they already knew works. Here’s hoping it works for them.
This has all caused me to be nostalgic for the Co-Op fridge freezer we used to have at home, with the bold logo fixed to a corner. It lasted for at least twenty years, meaning I also get to be nostalgic for the times when everything had to be made to last. With the increasing rate of technological advancement, nothing can ever be around long enough to break down completely – it rendered my last desktop computer as useless after six years, and my current one may be thwarted earlier than that.
However, what has struck me the most is that the original shade of blue is being used around the logo. It is the sort of blue you see on an old poster fixed to a shop window, long enough for the yellow ink to have faded, followed by magenta, leaving a cyan that cannot be erased. If the design can be interpreted as retro, as it is too symbolic and functional in nature to be kitsch or camp, the colour makes it timeless.
I am wary of nostalgia as a matter of course, preferring to use the lessons of the past in preference to wallowing in it. Why use remembrance of the good times to paper over cracks in the present, when it can be used to talk about the future? It’s a good way of making you think about where to buy teabags.