YOU BETTER PLAY THAT SAX 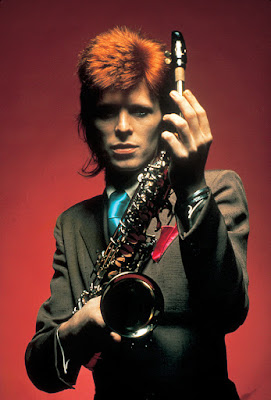 I see myself taking up the saxophone at some point. It’s a weird thing for most people to say, but to me, it’s almost inevitable. In fact, this is a warning to my family.


If you liked “The Goon Show,” “The Simpsons,” and David Bowie’s music since childhood, it will have instilled that saxophones are expressive, outrageous, and cool. This is before you even get to jazz, where the objective appears, sometimes, to blow your aching soul through a brass tube.


When Adolphe Sax patented his woodwind instrument a hundred and sixty years ago last Tuesday, they were intended for use in marching bands and orchestras. Sax would later suffer from lip cancer for a five-year period, years before his invention would use the blues to capture that pain.


People have always found ways of getting that bit more out of the saxophone, which changed to suit, its keys moving from the initial oboe-inspired layout to make playing both easier and faster. Its position between conventional brass and woodwind instruments also meant new orchestral pieces could be written using saxophones to blend these sounds together.


As jazz and pop music developed to incorporate its particular sound, the sax was seemingly the “next” instrument to include – once you have your guitars, keyboard and drums, the sax is the next easiest instrument to learn, before you get into the vagaries of finger positioning on the violin, and sorting out your embouchure on a trumpet.


However, you cannot deny that anyone playing a saxophone does look good. You are not stood or sat “behind” the instrument, you can bring it into your body, or hold it out, and its sound is not usually put in the “background” of anything – if you are playing, you are out in front, as people want to hear it.


I know I would have years of practice ahead of me to make all of this sound true, but expressing yourself means you have to start expressing yourself. I shouldn’t mind, however, if all I get to begin are squeaks and squawks, as some people did pretty well out of that.
In a 1983 interview, David Bowie talked about becoming a working musician by playing the saxophone, seeing this as his way out of London, and into America, particularly the 1960s West Coast, Beat Generation counterculture with which he associated the instrument’s sound. However:


“…When I started working with it… I found I didn’t have a very good relationship with the sax and that lasted right the way through. We’re sort of pretty embittered with each other. It lies there waiting for me to touch it. It defies me to... I really have to go through traumas to get anything out of it that anything to do with what I want it to say. So it’s not a steady relationship; it’s not a good one. It really is a love / hate relationship.”


Either he or his sax needed to back off.
Posted by Leigh Spence at 14:14