ON A PIECE OF PAPER I CAN SHOW IT TO YOU

Don’t worry, I will explain what these five symbols mean later.
Last Saturday, I returned from a trip to Winchester, ready to write about semi-detached houses, still overwhelmed by the surprise I came across there, while walking to the shops.
From 2005 to 2007, I worked at the Portsmouth branch of Mail Boxes Etc., a business offering mailing, shipping and printing services, where I also designed business cards, menus, posters, and anything that needed a bit of design. Surrounded by university buildings, there was a brisk trade in printing end-of-year essays, and sending belongings back home. 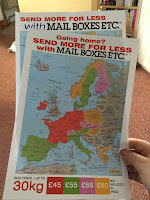 In 2006, to make our student shipping prices clear and simple, I designed a colour-coded map of Europe, with prices listed by colour. The colours I used – red, green, pink and amber - where to avoid confusion as much as possible, not because they were the nicest choices.
After changing the top of the design, posters and flyers were printed up, and the word was spread. I remember we used it the following year too. It does its job better than any lists and tables of prices would have done. I’m just glad it worked.
Meanwhile, ten years later, I walked past the Winchester branch of Mail Boxes Etc., and I see my past looking back at me. 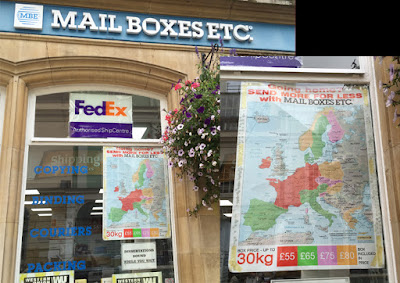 Going into the shop later, the lady behind the counter told me it had been placed there two and a half years ago, and people are often seen looking at it, or tapping the window when pointing at it.
I still don’t know what to make of this because, of course, having designed it for a business, they can use it for as long as they want – I just never expected something I did would ever last so long. Perhaps, it’s better to concentrate on what I can do now.
I now work at a healthcare company, which recently introduced a set of Core Values, setting up a competition to design pictures for these values, to put them at the front of colleagues’ minds.
It hadn’t been mentioned how they would be used, so I sketched out something that could be adapted as much as possible. Unfortunately, it wasn’t a winner, but I think the ideas still hold up.
The five symbols created symbolised, from left to right, the Core Values of Innovation, Business Responsibility, Professionalism, Adaptability and Mutual Respect. All the symbols are based within the same app icon-style frame, which represents the business itself. For “Innovation,” I needed anything but a light bulb, but lightning striking the existing turning cogs of the business was perfect. For “Business Responsibility,” all eyes are meant to be on the prize of new work, so we have arrows all pointing to a prospective new contract. For “Professionalism,” which you should bring to work with you, becomes the person that you are, and it is as simple as that – the snorkel then shows the “Adaptability” angle, and some waves would have later been added in the background. Finally, “Mutual Respect” is simply that, from one person to another.
All the symbols were in black and white, with no greyscales, meaning they could be used in anything from forms to posters, in whatever colour was required, while always remaining the same. Ultimately, a good symbol will be one that creates its own meaning, and it would have been interesting to see what would have been made of them, but there will always be another time – I’ll see what they look like in another ten years or so.
adaptability business responsibility core values innovation mail boxes etc mutual respect Portsmouth poster professionalism shipping student university Winchester