UPDATE (26/10/2017): I have now received my Gender Recognition Certificate in the post, and the world has, for once, become demonstrably better. The soundtrack to the celebration was “Land of Hoe and Glory,” followed by “Look Back In Anger” by David Bowie, and the live version of his “Station to Station” title track, from the “Stage” album.

There has been a lot in the news about transgender rights recently, especially in the last week – to those in the United States, still enraged by the President planning to remove thousands of trans people from the military, your President is Donald Trump, so what did you expect?


On Sunday 23rd July, the UK Government announced two consultations. The first, ahead of the fiftieth anniversary of the partial decriminalisation of homosexuality – the age of consent wasn’t the same for everyone until January 2001 - is to ask the LGBT community’s experiences of discrimination, and on accessing and using public services. I completed this survey online - you get the feeling that these questions are being asked for the first time, especially those on discrimination.


The other survey would have been important to me, but I already decided not to wait for the answer. In the autumn, the Government will canvass opinions on whether applying for a Gender Recognition Certificate, to change your gender in law from female to male, or vice versa, should be streamlined, allowing people simply to identify how they wish, instead of needing evidence about why you needed to do it.


Many people have not waited to be asked. We already know that Germaine Greer, “Woman’s Hour” presenter Dame Jenni Murray, and the novelists Chimamanda Ngozi Adichie and Fay Weldon are all on record as saying that transgender women are not real women, while on Twitter, Piers Morgan has a profound dislike for the idea of people not identifying as male or female, although “third gender” or “two-spirit” people, among other names, are found in cultures for centuries. 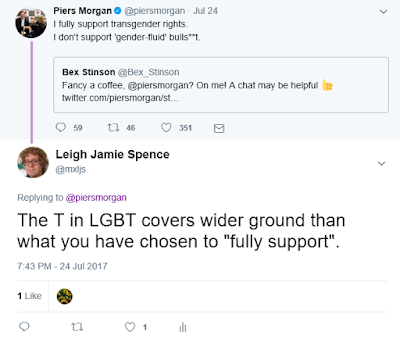 The reason I am not waiting for the Government here is simple – I am applying for a Gender Recognition Certificate, under the existing system. There had been a bill in Parliament to change the process, but after the first reading, months of delays, and a General Election, nothing more happened.  Therefore, I am pressing on with what the existing process, which costs £140, requires me to do.


It relies heavily on evidence that you are on your final-destination path, including medical reports, passport, utility bills, official letters, and a statutory declaration I have signed in the presence of a solicitor – there may have also been something about collecting all the gold rings, jumping over a ravine, and rescuing a princess, but I haven’t seen anything more about that. A panel then decides if I should be given the certificate that has “female” written on it, but with what it has taken to get there, both in years of personal experience as well as paperwork, it may as well also say “sane.” Either way, it unequivocally leaves no room for doubt.


Even if I am choosing to do this the hard way, it doesn’t mean it will be a harder-won victory than those that may only have to fill in a simple form later. For the record, I think having a statutory declaration will weed out those who don’t realise how serious changing your gender, in the eyes of the law, really is. Only 112 people submitted applications under the existing process in the first three months of 2017, so making that process easier won’t open the floodgates for women’s toilets and changing rooms to be invaded by men, which is an understandable fear, but unlikely. The Republic of Ireland already have a simpler process, introduced in September 2015, and only 240 people have used it, out of a population of five million.
Posted by Leigh Spence at 08:10