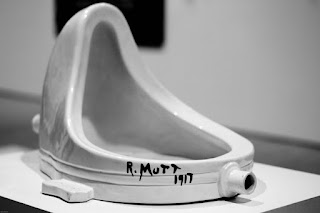 One hundred and one years ago, the Swiss writer Hugo Ball, with artists Hans Richter, Tristan Tzara, Jean Arp, Richard Huelsenbeck, Sophie Taeuber and others, inaugurated the art movement known as “Dada,” at the Cabaret Voltaire in Zurich. Some Dada exponents found their way to Switzerland due to the upheaval of the First World War, and it was the horror of this conflict that fomented a rejection of the logic and values that led to it. Dada, purportedly taking its name from the word reached when a knife was plunged into a dictionary, aimed to effectively start again, making new connections with language, context and understanding, using collage, cut-up writing, poetry, sculpture, theatre – anything can be Dada-fied, right down to Marcel Duchamp putting a urinal on its side, putting it on a plinth, signing it, and calling it “Fountain.” 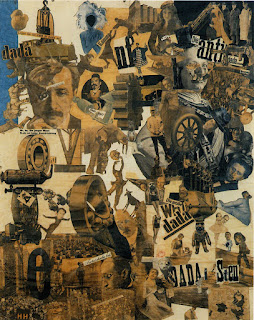 Now, it is a little bit of a stretch to extrapolate this extreme version of rejecting one form of looking at the world in favour of another, and try and compare it to the current trend over fake news, alternative facts, left versus right, Marxism versus neo-liberalism, or common sense versus nonsense, but that never stopped anyone before. Therefore, I will say that the rejection of the perceived status quo in British and American politics, and the ideologies and acts that have followed it, feel like a kind of anti-Dada, or “jackanape,” to take another random word from my nearest dictionary. It does feel like, instead of reacting to the logic of those at the top, we are instead reacting to the strange and unpredictable sounds coming from the bottom.


The immediate problem with this kind of definition is that politicians, activists and conspiracy theorists are not groups that can have their title replaced with “artist,” or “jackanape artist,” because the artistic imperative is not there, unless they then comment on their own activities in an artistic way. However, either side can accuse the other of being a “stand-up comedian” if they think they are hearing rubbish. Even worse, you can call yourself a “performance artist playing a character” as a way of excusing outlandish thoughts and actions, as done by the lawyer representing arch jackanape artist and “Infowars” presenter Alex Jones. This description came about during a custody battle with his ex-wife, but yelling down a camera cannot be explained away later as a performance, if that is not how it has been presented. 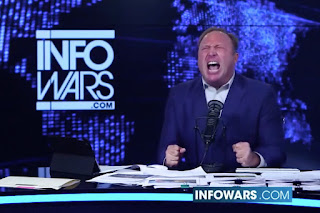 So, the “jackanapes” is not something we have seen – yet. If we do, I have “soapberry” ready, another random word, for any possible anti-anti-Dada uprising. Artistic responses to politics will always come, but when politics feels like it sometimes defies interpretation, the question could then become whether it is easiest to oppose it, or bypass it, or ignore it, instead of interpreting it – if a single answer does arrive, I hope it can pick a better word at random than “soapberries.”
Posted by Leigh Spence at 06:05