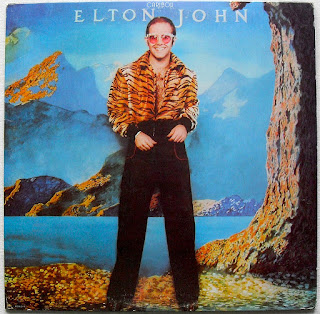 "Solar Prestige a Gammon” is a song from side A of Elton John’s 1974 album “Caribou.” The album was made under a contract that required John to release two albums per year – “Caribou” came only eight months after his masterpiece, “Goodbye Yellow Brick Road,” and was recorded in only nine days before embarking of a tour of Japan, leaving his producer, Gus Dudgeon, to finish the arrangements and mixing. Despite the rush, the album reached number one in the UK and US, and spawned two singles, “The Bitch is Back,” and “Don’t Let the Sun Go Down on Me.” Dudgeon’s own assessment was: “’Caribou’ is a piece of crap… The sound is the worst, the songs are nowhere, the lyrics weren’t that good, the singing wasn’t all there, the playing wasn’t that great, the production was just plain lousy” – seeing as Dudgeon was in charge of the production, I can only guess this was a case of the creative process not being what you wanted, even if the result was.


“Solar Prestige a Gammon” begins in the manner of a lament, but all is not as it seems: “Oh ma cameo molesting / Kee pa a poorer for tea…” The lyrics, by John’s songwriting partner Bernie Taupin, are sung in a cod-Italian fashion, but are comprised of seemingly random English words. “Cod” is the operative word: “turbert,” “salmon,” “hair ring,” “sardin,” “floundin,” and even “cod” are words used by Taupin, along with “molassis” and “gammon” for those made hungry by the references to fish. The chorus is a shift to a jauntier tome, the lament left behind, because life carries on: “Solar prestige a gammon / Kool kar kyrie kay salmon…” Que sera, sera… 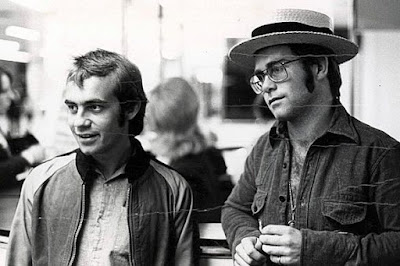 Clearly, the lyrics in this song are supposed to be nonsense, but it is inspired nonsense. John has previously said the initial idea for “Solar Prestige a Gammon” came from the Long Medley on side B of The Beatles’ album “Abbey Road,” most notably John Lennon’s “Sun King”: “Mundo paparazzi mi amore cicce verdi parasol” - in turn, “Sun King” was inspired by Fleetwood Mac’s “Albatross.” The quote from John reads, “I thought it could be great to write a song with English words that didn’t mean a thing, but that sounded fantastic when put together.” It has also been said that the deliberate avoidance of meaning was due to people having read things in Taupin’s previous lyrics that may not have been intentional, like “Madman Across the Water” being about Richard Nixon, religious references in “Border Song” and “Take Me to the Pilot,” and “Grey Seal” being about nothing in particular.


Everything I thought I did hear in “Solar Prestige a Gammon” is an example of the pareidolia I have examined previously [link] – just like you look for faces in inanimate objects, you hear for patterns in music and speech, which have created the system of scales and chords found in Western music, and where the joke surrounding rock bands like Status Quo is there are only three chords, and you know when they are going to appear. Does this mean that any attempt that writing something that is deliberately nonsense is doomed to be made sense of by the next person to come into contact with it? Possibly, so long as there was a reason to do it. 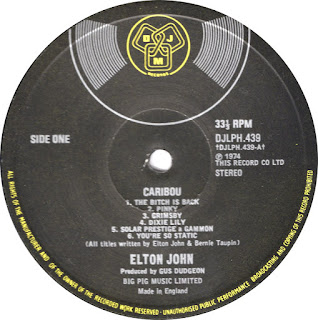 Email ThisBlogThis!Share to TwitterShare to FacebookShare to Pinterest
Labels: Abbey Road, Bernie Taupin, Caribou, Don't Let the Sun Go Down on Me, Elton John, Gus Dudgeon, Madman Across the Water, Richard Nixon, Solar Prestige a Gammon, Take Me to the Pilot, the beatles, The Bitch is Back