SOMETIMES THE SUN GOES ROUND THE MOON [95]

Is there a rational reason for believing the Earth is flat?


It’s quite a question to pose, challenging universally held truths about how we see the world, and how we live our lives, but questioning them sometimes reminds us of the concrete truths upon which we base everything else.


But is there a rational reason? Any reason? No. Absolutely not. No way. In fact, I should tell myself to fuck off for even thinking of the question. It is not really even a question, because it is not in question – we all know the Earth is round. There was already enough evidence produced in the last couple of thousand years before anyone could take a picture from space. A bit of me did think of this as being too easy a target to discuss, but when the target - the Flat Earth Society, and there still being a theory about the Earth being flat, takes itself too seriously, it makes itself fair game.


Why would such a stupid question come to mind? It was a simple case of an engineer entrepreneur launching a car into space, and the usual suspects having a go at him using a spurious premise they themselves had set.


Last week, Musk launched the SpaceX Falcon Heavy, a partially-reusable rocket for launching payloads into space. Instead of simulating the weight of a satellite, or other payload, by using concrete or metal, Musk installed one of his Tesla cabriolets, and the unveiling of the car in front of the Earth, with a dummy driver named “Starman” in the driving seat, playing David Bowie songs, could well be cooler than playing golf on the moon. 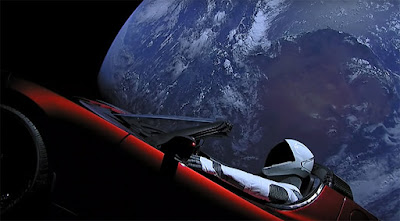 However, an inevitable statement on the Flat Earth Society’s Twitter feed said, “Why would we believe any privately-held company to report the truth?” Meanwhile, their Facebook page sought to debunk what everyone saw: “we have already witnessed the shortfalls of this blind belief in online materials,” reminding us that “corporations are driven by profit, not the pursuit of knowledge or truth.” For the record, Elon Musk previously questioned on Twitter why there is no Flat Mars Society – the Flat Earth Society replied that Mars has been observed to be round.


The Flat Earth Society’s wiki [link] is aimed at “unravelling the true mysteries of the universe,” while demonstrating that the “Round Earth doctrine” is an “elaborate hoax.” It does this by having an answer for everything: Earth is a disc, with the Arctic in the middle, and the Antarctic as a ring around the edge; magnetic fields are created by ring magnets in the Earth, rather than unipolar ones; weather is created by the landscape; you cannot see the curvature of the earth, even when in a passenger plane flying at 36,000 feet.


I had looked to see how the word “satellite” related to the theory of a flat Earth, since global communications, including Facebook and Twitter, rely on communications satellites, geostationary orbits and atomic clocks to work, all things that require the Earth to be round, and what I found were reports of a campaign led by B.o.B, a rapper, to put a satellite above the earth to gather independent evidence to examine – this is “independent” as in independent of NASA, the perennial target for conspiracy theories. For a theory that distrust the evidence that science brings to the conversation, using science to prove the opposite seems a bit suspect.

The only legacy of flat Earth theory is that “Flat earther” is a term for someone that believes in an outlandish or discredited theory, or refuses to believe something despite overwhelming evidence, and I really have nothing to say further than that. We all know what to think about this, as we have all the evidence for it already. 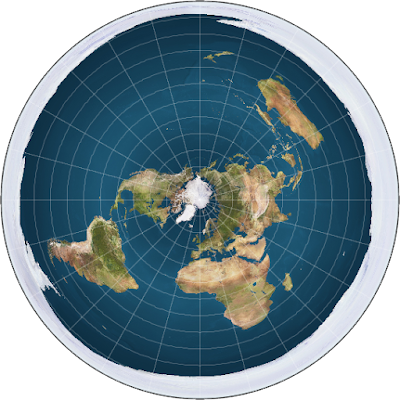