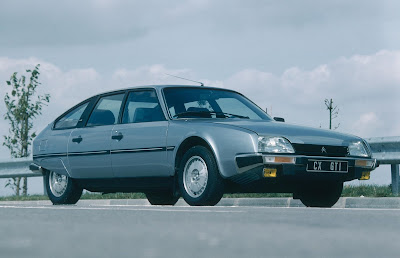 In the desert, the large metal head of the singer Grace Jones rises from the horizon. Twisting right, its mouth opens, and a car speeds out across the sand, before screeching to a halt. We glimpse the driver, but the car screeches away. We see the driver again: it is Jones herself. “Yeah,” she sings. Once more, a tone higher, “Yeah!!” Higher still: “Yeahhh!!!” Under the car, a caption appears: “Nouvelle CX2.” The car speeds back into the mothership’s mouth, which twists back, hiccups – a hand covers the mouth from the after-effects of eating the car – and the head moves back down.


When this advertisement appeared in 1986, the Citroën CX had already been on sale for twelve years, and will be for another five, but the refresh completed on the car was designed to reinforce its image as one of the most distinctive and unique cars on the road, alongside the 2CV [link]. It was a company car, a family car, a grand tourer, and the limousine for a number of heads of state, from Jacques Chirac to Nikolai Ceausescu. Grace Jones was seen to be driving it, but Grace Kelly also drove it in real life. 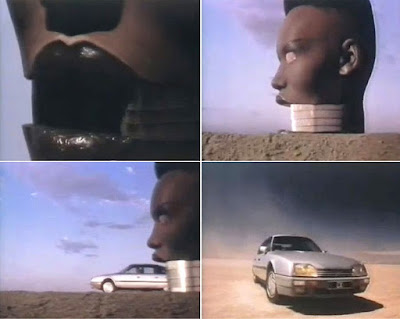 However, it was amazing anyone really got the change to buy one, let alone drive it. In 1974, when the CX was going on sale, Citroën were being rescued from bankruptcy: under the direction of the French government, Peugeot started buying shares in the company, before taking full control in 1976, creating PSA Peugeot Citroën. The cars would continue, but later sharing of parts and design with Peugeot diluted what made Citroën different for many years, until its recent resurgence with the C3, C4 Cactus, and the DS line. The CX is considered to be the final “real Citroën.”


What makes it special? The CX replaced the DS, the goddess-like (“déesse”) space-age saloon, itself on sale for twenty-years. The CX updated the DS’s design with sleeker, lower lines, achieving a low drag co-efficient (usually written as Cx), and influencing later cars like the Rover SD1, Ford Sierra [link] and even the current Audi A5, which is even the same length as the CX. It updated the hydragas suspension from the DS, giving each wheel its own sub-frame to eliminate practically all bumps on the road – the estate model was used to film horse racing, matching speed with a stability of picture that matches what Steadicam would achieve later. This suspension would later be licensed by Rolls-Royce to use on its own cars. Power steering was also standard, but that was because two-thirds of the car’s weight was over the front wheels. 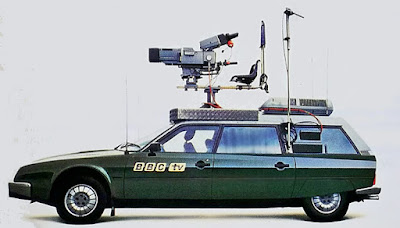 Inside, the dashboard was more reminiscent of a spaceship, presenting the driver with an array of buttons and levels, instead of the usual dials and control stalks. The driver had control of raising and lowering the suspension – there is little that is cooler than seeing a car rise up before it drives away – but they also had to turn the indicator lights off after they made their turn. These two abilities were enough to ban them from being sold in the US, where they were required to be automatic. These regulations have changed since, but at a time where you couldn’t even make the headlights aerodynamic to fit flush with the lines of the car, the CX was restricted to private imports.


Despite all the engineering packed into it, the bankruptcy of Citroën remained the key problem for the CX throughout its time on sale. The CX was meant to have a rotary engine inside, instead of a regular piston engine, but that project was cancelled before it could appear. The company was short of cash, but it bought Maserati, and co-developed the SM coupé, the lessons of which would be included in the CX – Maserati was sold in 1975, after the Italian government stepped in to stop Citroën from liquidating the company. 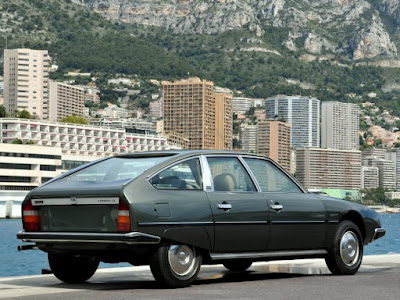 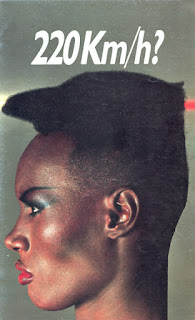 With Citroën only making either tiny cars, like the 2CV, or massive cars, Peugeot was adept at filling the mid-size market alongside Renault, but with both Peugeot and Citroën having the big car market between them in France, so it could only take sales off itself. With the next Peugeots being the priority, all the advantage the CX had would slip away. The update in 1986 was more cosmetic, and more conventional, but was also expected to happen about five years earlier, sales having already dropped off by then. When a replacement did appear, in 1989’s Citroën XM, it was based on the Peugeot 605. When that car ended production in 2000, it took five years for the CX-like C6 to even appear.


The last CX was made in 1991, and we can now look at it without the problems that blighted its production. Fortunately, many other car makers have too, influencing their designs to this day, and in projecting the image Citroën strives to meet today. Having said that, my father once hired a Citroën C4 Cactus, and for all the touch-screen controls, having rear windows that could wind down would have been nice.
Audi A5 C4 Cactus citroen citroen 2cv Citroen CX Citroen DS Ford Sierra grace jones Grace Kelly Jacques Chirac Maserati Nikolai Ceausescu Peugeot Rover SD1