An iconic scene of British television exists almost entirely without explanation. The scene, replayed whenever the stars met, is of Kenny Everett bending and breaking Terry Wogan’s long wand of a microphone on the BBC game show “Blankety Blank.” What must have initially been an impulsive move, the result of Wogan’s pointing it in the wrong direction for a moment, became a procession of breakages, most notably with a pair of garden shears, as Wogan presented the opportunity each time they met. The phallic connotations of the pranks were definitely not lost on the audience, or on Wogan, who would present the rest of show with his microphone cruelly cut down or bent out of shape.


Anyway, why did Terry Wogan have that microphone? It is a question I have never seen asked, let alone answered – it just seemed to be accepted. I think I know the answer, and it stretches back over fifty years. 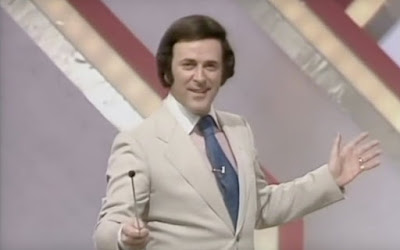 For the uninitiated, “Blankety Blank” is based on “The Match Game,” an American game show format made by Mark Goodson-Bill Todman Productions, which made their name with the panel game “What’s My Line?” This show spawned sequels “To Tell the Truth” and “I’ve Got a Secret,” while other Goodson-Todman shows also remade for British TV include “The Price is Right,” “Password,” “Blockbusters” and “Call My Bluff” – yes, at one point, “Call My Bluff” was being played for money.

“The Match Game” began back in 1962, with two teams of three, each headed by a celebrity, attempted to match their teammates’ answers to simple questions like, “what word is most often used when you talk,” or “what word would you use to describe Nikita Khrushchev.” If you did ask someone to fill in a blank, it would be something like, “to a rich man, [blank] dollars is nothing.” So much, so pedestrian. The show was in danger of being cancelled, which emboldened the staff writing the questions. Once statements like, “John liked to put butter on his [blank],” ratings picked up. However, the refined dinner party atmosphere, for that was how everyone on US TV in the 1960s dressed, kept the show in check. 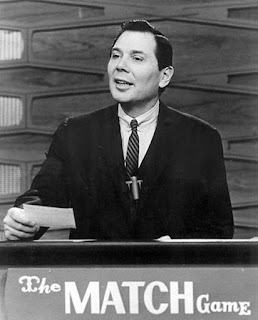 Proceeding over “The Match Game” until it ended in 1969 was Gene Rayburn. Like Terry Wogan, Rayburn had presented on radio, except his shows on New York’s WNEW with Jack Lescoulie, and later Dee Finch, defined what we now know as a “breakfast show,” before Wogan turned his BBC Radio 2 breakfast show in a Beachcomber-esque subversive fantasy in the 1990s. Rayburn was also the original announcer of NBC’s “Tonight Show” in 1953, before becoming a game show host – watching Rayburn, stood behind a lectern on the remaining recordings of the 60s “Match Game,” microphone hung around his neck, he looks hemmed in. You wait for the veneer of respectability to crack, and for Rayburn to jump into the middle of the floor. He would get his chance.

When “Match Game” returned in 1973, just after the Watergate hearings and titled, erm, “Match Game 73,” it was like night and day. If sensibilities had changed, “Match Game” was there with double entendres to match: “Though Sam was eighty years old, he still liked to [blank],” “Mary never told anyone her [blanks] were fake,” “Raquel preferred to [blank] in the dark,” “Mary has never seen John’s [blank],” and “everyone watched in amazement as Tonto [blanked] the Lone Ranger” – after reading the last one, the returning Rayburn fell in laughter onto the stage’s orange shag carpeting. 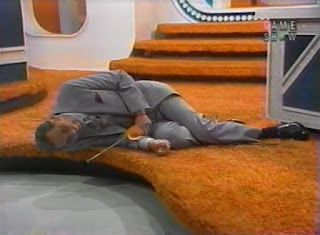 This time, Rayburn was free to roam. He originally had a lapel microphone, but 1970s technology meant a wire trailed through a door to it. This would be replaced by a Sony EMC-51 microphone that Rayburn would have to hold, but when Richard Dawson, the show’s first permanent celebrity panellist, realised the handle was telescopic, he left it for Rayburn to pick up at the start of one show, and almost take his eye out. From there, it became a prop – a conductor’s staff, a magic wand, a doctor’s saw, anything it needed to be, at any length it needed, until constant wire pulling meant a long mic was cut to size.

The answers, this time from a panel of six celebrities not unlike the nine of “The Hollywood Squares” (retitled “Celebrity Squares” in the UK), were about as bad: one answer involving Batman and Robin was “queer,” with alternatives of “divine,” “married” and “fairies” – the contestant got three queers. These shows were going out as early as 11:30am, but with the filth residing in the minds of the audience, this version of the show became the number one show on US daytime TV, beating all other game shows, all of the soap operas, and the news. 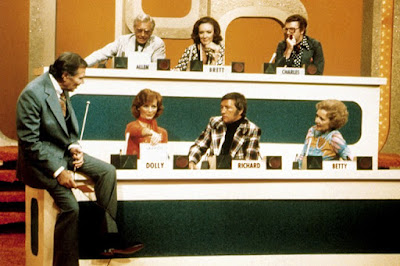 This version of “Match Game,” which lasted until 1982, is worth finding, and is readily available online. If you imagine the more refined and polished primetime show that “Blankety Blank” was, “Match Game” was rough, randy and raucous. As said by one frequent celebrity panellist on the game, the theatre director and actor Charles Nelson Reilly, “this is not a show, this is a social engagement”: the shows were recorded at the weekend, and the lubricated condition of the celebrities made it clear which ones were recorded after their lunch break.


(The best answer I have ever seen on “Match Game” was a 1976 episode. The statement was, “Clive the lion tamer treats his wife like one of the lions – each night he makes her [blank].” The answer given was, “put his head in her mouth.” That answer was given by actress Mary Wickes, best known for playing a nun, in “Sister Act.” The show was broadcast, uncut, at 3:30pm.] 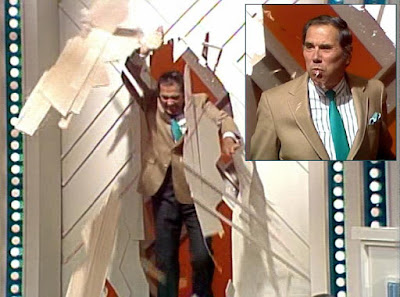 This does sound like I am describing a different show to what the BBC made of it – “Blankety Blank” could be watched by the whole family, but Terry Wogan’s tenure as host was more “cheeky” than Rayburn was on “Match Game” – Wogan was less likely to grab hold of cameras or climb over the audience. Thankfully, someone noticed the potential of the prop microphone, although the BBC’s answer was to stick a lapel mic on a car radio aerial. However, “Blankety Blank” has the better theme tune, almost a British answer to the 1960s “Batman” theme.


The demise of “Blankety Blank” appears to have been the prizes – not allowed or able to afford tens of thousands of pounds in cash, the BBC relied on things like TVs, crock pots and wicker furniture, and once that becomes the focus of the gags, especially once Les Dawson took over from Wogan in 1984, things start going amiss. Dawson’s wordplay Is unmatched, but once you have someone who takes the prime prop of the show, and deliberately breaks it themselves on their first appearance, you know something has been lost.


In a parallel universe, “Blankety Blank” would be on the air, just as “Match Game” is on US TV right now, presented by no less than Alec Baldwin, with a cordless version of the stick mic – why RuPaul or Ice T have not done an Everett with it is beyond me. 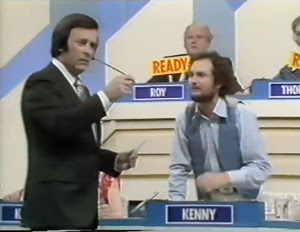