I COULD MAKE IT LONGER IF YOU LIKE THE STYLE [120]

Here are a few of those stories that, while not becoming full-length articles, still needed to be told: 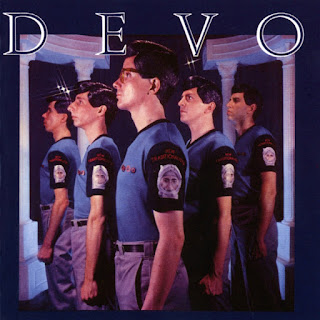 1. PUT THE TAPE ON ERASE: After learning how the FLAC format preserved the sound of my CDs onto my Sony Walkman [link], I was disturbed by the clicking noise on the test track I used. Was it caused by the Walkman, the transfer program, or a scratch on the (brand new) CD? No – it was the original recording. I used “Through Being Cool” by DEVO, a song written in revolt at the sudden popularity of “Whip It,” and a song I played multiple times a day at the time, putting the clicks down to the YouTube upload I found. I later found it was down to the record company: DEVO’s “New Traditionalists” album was recorded using a new brand of analogue tape from 3M, but after finding the tape was falling apart from the edges, DEVO appealed to Warner Bros to re-record their work – they refused, so DEVO had to transfer the now-imperfect recordings to another tape in order to complete the album. The darker, less polished sound of the album could be said to be an unhappy accident, but when DEVO wanted to “spank the pank who tried to drive you nuts,” they could have been singing at Warner Bros. 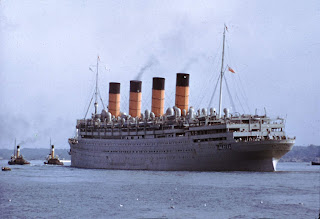 2. I AM SAILING STORMY WATERS: “Captains of the Queens” was a memoir by Harry Grattidge, a commodore for the Cunard line of ocean liners, and he writes in it about how, in 1949, a piano fell through the floor of a dining room on RMS Aquitania, while a corporate lunch was taking place. The Aquitania entered service in 1914, alongside the Mauretania and Lusitania, ships originally in competition with White Star’s Titanic and Olympic. However, after thirty-five years, two world wars and three million miles, it was not in the best shape, with leaking decks in poor weather. Aquitania would be withdrawn from service by the end of 1949, deemed too expensive to refit, after three years ferrying people emigrating to Canada, and scrapped in 1950. The image I have in my head was that the piano was being played as the floor started to collapse – people then stood around the eventual hole, the piano having impacted the floor below, as one person tells the player, “well, it made a better noise than you did.” 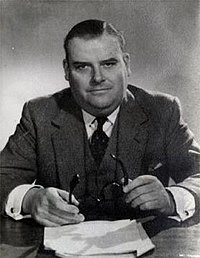 3. DON’T YOU FORGET ABOUT ME: “The Goon Show,” the surrealist masterpiece by Spike Milligan, Peter Sellers and Harry Secombe, was nonetheless a BBC radio show from the 1950s, and had an announcer to, well, announce the episode. Enter Wallace Greenslade, who joined the BBC’s European service in 1945, becoming an announcer on the Home Service (now Radio 4) in 1949 to link programmes and read the news. Greenslade joined “The Goon Show” with its third series in 1952, just as it was turning from programmes of sketches into single three-act stories.  Greenslade’s clipped, authoritative delivery made Milligan’s diversions deceptively understandable and reasonable, proving to be the perfect straight man, playing other straight parts in stories as required. He was also allowed to be belligerent: “The Six Ingots of Leadenhall Street Part 2, or the Two Ingots of Leadenhall Street Part 6, whichever you like, I don’t care.” With “The Goon Show” playing out across the world, including on US radio by NBC, Greenslade also became one of the first on-screen newsreaders on British television, making a trademark of taking off his glasses when wishing viewers a good evening at the end of the bulletin. Greenslade died of a heart attack in 1961, aged just 48, only one year after “The Goon Show” ended, never to knowledge of the place he has in British comedy to this day, as the man who subverted authority by playing the very voice of authority.
Posted by Leigh Spence at 05:17