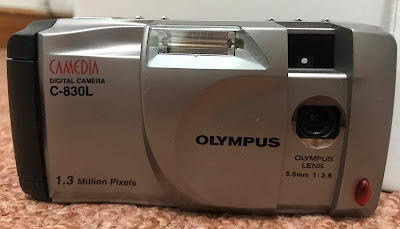 Until I recover my pictures, this is a cautionary tale.


We choose to use old digital cameras. We choose to use technology from two decades ago over our smartphones, not because it is easy, but because it is hard, because that goal will serve to frustrate and drain the best of our energies and skills, because that challenge is not one we should have been willing to accept, one we are willing to postpone, and one which we intend to win, or not, just give me a break.


Whereas John F. Kennedy proposed reaching the Moon to push the United States into the future, using an old camera attempts to catch the past within our present, reframing what we see now in an evocative and familiar fashion – usually a less detailed, less colourful version of now.


I tried to replicate this effect using what I already own, but reducing the resolution of pictures taken on my iPhone 7, or even on my Sony CyberShot camera from 2009, down to the 0.3 million, 640 x 480 pixel-size standard for digital cameras twenty years ago, only gives you smaller versions of well-taken pictures. Buying a camera that uses film was out of the question, as were the costs now involved with developing film (such as travelling to somewhere that still does it), so finding something suitably old almost took me back to the beginning of digital cameras. The first consumer digital camera was 1994’s Apple QuickTake 100, but I was able to find an Olympus Camedia C-420L, from 1998, for a modest amount on eBay... However, it could not read the memory cards inserted into it, so I then found a C-830L, released the following year.

Both Olympus cameras could be mistaken for a 35mm film camera, perhaps to make them easy for first-time digital users. To take a picture, you have to look through the viewfinder window at the top – there is also a screen, but you have to turn it on first, with the rest of the operations controlled by the buttons and LCD screen along the top. The cameras have no internal memory, requiring you to load a SmartMedia card (a large predecessor to the SD card) like you were loading film – the C-830L takes cards of up to 16 megabytes in size, enough for nearly 100 pictures, or only 24 pictures in high resolution (1.3m pixels). The cameras do not simulate the click of a picture being taken, as enough mechanics remain for it to make that noise anyway.


So far, so good, but this is when progress in computer technology starts to eat away at your resolve. We are so used to plug-and-play devices, USB connections, cheap controller chips, and common software and file formats - we expect everything to be read first time without question or issue. This is an incredibly recent luxury – even adding a mouse to your PC once meant loading a program to make it work. In addition, Microsoft Windows has been through about seven different versions in twenty years, meaning old software will no longer work on new computers – this is why businesses continue to pay Microsoft to maintain support for Windows XP, which dates back to 2001. 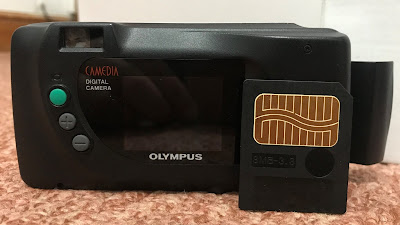 Here is where I stand: I have a camera that should have some pictures on it, in some form. I could not connect it to my computer – what I thought was an old-style serial port turned out to be a monitor output, so I have sourced a USB adaptor. The software provided for my camera is so old, my Windows 10 computer cannot read it. To create a computer that can read it, I downloaded Oracle’s VitrualBox program, which can simulate a virtual old-style computer within your regular one, but even that requires its own operating system to work - as a result, I bought an unopened copy of Windows 98, the first version of Windows that provides proper USB support, for £10 on eBay. All I need to do now is to get it to recognise the ports on my computer, and I should reach the end of my journey.


I refuse to be beaten by this - I have come too far. This is no longer about nostalgia, or even about the pictures: this is about the will to succeed. When the time comes, I shall share the results, but until then, the journey continues.