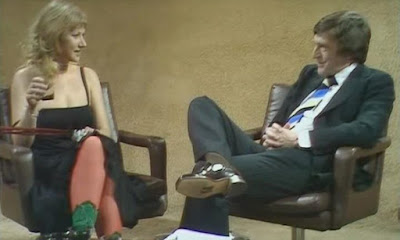 “If you didn’t live in that time, you’re not allowed an opinion in my view.”


“If you didn’t live in that time, you’re not allowed an opinion in my view.”


“If you didn’t live in that time, you’re not allowed an opinion in my view.”


This sentence has rattled through my head for the last week, because I have never heard anyone say something like this before. I also cannot think of a situation where you could get away with saying something like it. How do you respond to it? Am I allowed?


When writing about why I don’t like chat shows [link], I came across an interview gave to the “Mail on Sunday” newspaper in 2016 [link], just as a book on his encounters with Muhammad Ali was published. Even if I wouldn’t have made a point of tuning in to “Parkinson” in the 1970s, if I had been around then, I probably would have if Ali, or Billy Connolly, or Peter Sellers, or Kenneth Williams was a guest – some people are worth hearing, even if they are mainly there to promote something.


Although the article was to promote the Ali book, the headlines came from when Parkinson was asked if there were any moments in his career that he regretted. Saying he has been accused of being old-fashioned, Parkinson used the example of the 1975 interview he had with Helen Mirren, who was introduced on the show was the “sex queen” of the Royal Shakespeare Company and, after a theatre critic was quoted as saying Mirren was good at “sluttish eroticism,” Parkinson asked if Mirren thought her “equipment” got in her way of performing as an actress. After clarifying he was referring to her figure, Mirren replied, “Serious actresses can't have big bosoms, is that what you mean?”


The interview can easily be found online, and while it has since been decried as sexist since, it was perfectly fine for broadcast in 1975 – “it was OK at the time” is a phrase often heard in cases like this, usually because it may not be these days. In the “Mail on Sunday” interview, Parkinson said he may have overreacted, but he was reacting to the provocative figure Mirren presented. When asked if they had made up since, Parkinson said, “I don't want to. Nor does she. I don't regard what happened there as being anything other than good television. There is no need to apologise, not at all. She didn't want to do an interview and after about ten minutes I didn't want to interview her. There's no problem, it's not World War III for God's sake.”


For her part, Dame Helen Mirren, later quoted in an article for “The Telegraph” website [link], said, “That’s the first talk show I’d ever done. I was terrified. I watched it and I actually thought, bloody hell! ... I did really well. I was so young and inexperienced. And he was such a f------ sexist old fart. He was. He denies it to this day that it was sexist, but of course he was.”


This leads me to where I became unstuck. In his interview, Parkinson is reported reacting to the notion of his interview with Mirren being a defining moment of the “sexist” Seventies: You have to judge it by what happened in that time. If you didn't live in that time, you're not allowed an opinion in my view [my underline].... I’ve not done anything that I'm ashamed of. I can see everything in the context of the time I did it. I can think, 'Ooh, I wouldn't do that now.' But that doesn't mean to say I was wrong at the time.”


The interviewer, challenging that one sentence, writes, “if one of his guests had said that, he would have challenged them strongly,” but I wished it was challenged in this interview, although we do get the odd quote later, “Am I a sexist? No, I'm Yorkshire. I don't know what the answer is or what a sexist means, basically. I've been married for 57 years so something must be going right. I wouldn't say I'm a sexist at all.”


To be honest, I just needed to write about that one sentence, “If you didn’t live in that time, you’re not allowed an opinion in my view,” but I also needed to present the context in which that was uttered. I will go with Dame Helen’s reaction to the interview, because she definitely was there at the time, but to say you are not allowed to have an opinion on something is a red flag that needs as much oxygen as possible – if I said that to anyone, I would be demolished in response. Perhaps it is easier, for Sir Michael Parkinson, not to use his chat shows as primary sources.
Billy Connolly Helen Mirren Kenneth Williams Mail on Sunday Michael Parkinson Peter Sellers Telegraph Yorkshire