AND PLAIN TO SEE THE FACTS ARE CHANGING [131] 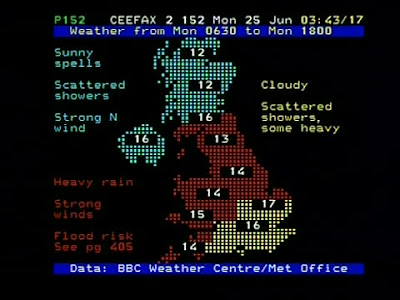 Memories are short. Instant access to information via the World Wide Web has only been available to the general public since August 1991, with mobile and broadband internet only becoming commonplace in the last fifteen years. However, if you had the right television, instant recall of news, sport and financial updates, TV and radio listings and even recipes, was possible as early as 1974, before the first home computers appeared. Look down at your remote control, and the remnants of Teletext will stare back, marking where the information superhighway begins.


The world’s first teletext service was the BBC’s CEEFAX (“See Facts”), launched in 1974, following two years of testing technology developed by Philips, which had already launched the first consumer video recorders by then, and were readying what would become the LaserDisc and Compact Disc. The BBC had already been experimenting with “BEEBFAX” in the late 1960s, using TV transmitters to broadcast a page of information overnight, not unlike a newspaper page, to be printed on a fax machine-like printer at home. This project was shelved because the printer was too noisy, but with Philips proposing to use the screen, work started again.

The way teletext worked is down to how old televisions worked, in ways that are still well known to many. Put extremely simply, the reason not all 625 lines are broadcast to make up a TV picture is because the top and bottom of each field of lines is left blank to denote where the picture starts and ends, literally creating the “vertical blanking interval,” also known as the black bar that rolled down the screen on analogue TVs when the channel was not properly tuned in – horizontal blanking intervals also take up some of the width, and digital television makes sure you see none of this at all.


Teletext used the spare lines from the vertical blanking interval to broadcast a cycle of digital code that creates each frame of text. When you enter a three-digit code for the page you want, like 430 for travel news, you would then see the number scroll through the cycle as it is broadcast, until it reaches your page – popular pages were broadcast more than once. Each “magazine” of pages was broadcast on its own line, usually grouped by subject, to a maximum of eight lines – when subtitles for TV programmes were added from 1981, the page for this was usually placed at the end: it was originally 170, and eventually ended up at 888. Each page also had a number of frames, for longer news items and other stories, for which you may need the “hold” button on your remote control. 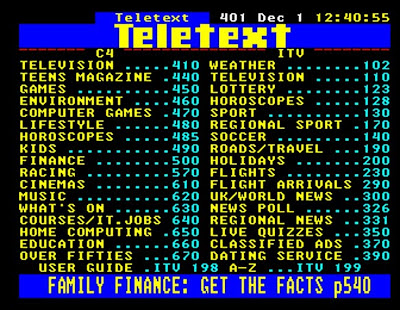 Later, hyperlinks to other sections of teletext were possible by red, green, yellow and blue “FastText” buttons. A “Reveal” button was also available for parts of pages, like revealing a punchline for a joke. Blocky pictures were also possible using the palette of eight colours, which included the black background, and breaking news could be left to scroll along the bottom of your screen while you continued to watch TV.


Ceefax would grow slowly at the BBC in the 1970s. Initially a staff of nine would write the original thirty-page magazine, broadcast on a single line, which were punched onto paper computer tape, and sent to a different floor of BBC Television Centre to broadcast them – updates only happened on weekdays, as everyone went home for the weekend. From 1981, the BBC Micro computer was used to create pages, and could be received at home with an adaptor – basic computer programs were also broadcast using teletext. Viewers in the UK will also be used to “Pages from Ceefax” filling in gaps on BBC television during the day when there were no TV programmes to show. 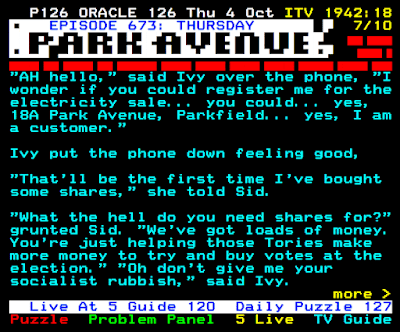 Of course, this is all gone now – digital teletext was introduced in 1999, using information from Ceefax, but by the time the end of analogue TV killed off Ceefax in 2012, it was using text from the BBC’s website, and some of the sections could only be found online, because it was just easier. A similar text service that used your phone line, Prestel, allowing you to buy items and view your bank account at home from 1976, had already ended by 1992, mainly because it was cheaper to  Even looking at the “BBC Red Button” service today through my TV, it is cut down even from when it began, almost to the point where there is no longer a need for it. However, teletext was built because a need for it was found, a need that continued to find ways to fulfil itself. 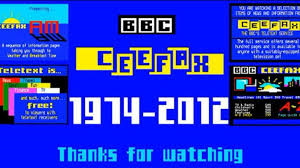