YOU MAY BE HOMELY IN YOUR NEIGHBOURHOOD [139]


Seeing pictures, taken in the 1970s, of the Hollywood sign in a state of dereliction and disrepair, are confusing and disconcerting. Seeing pictures of the building of Tower Bridge, or the Eiffel Tower, bring up similar feelings: haven’t they always been there, and why was there a time when they didn’t exist? All three structures define, influence and symbolise the ideals of the areas around them, which brings me back to the Hollywood sign: what is it about Hollywood that left it to fall apart?


Pretty much everyone knows the sign was originally built in 1923 to read as “Hollywoodland,” to advertise the new (whites-only) neighbourhood built further down Mount Lee, in the Hollywood Hills area: the houses imitate the design of Mediterranean villas, particularly from France, Spain and Italy. The builders of the estate, among which included the founder of West Hollywood, and the owner of the “Los Angeles Times,” owned the land on which the sign stood, but signed it and the remaining undeveloped land to the City of Los Angeles in 1944, which was added to Griffith Park, home to the observatory and Los Angeles Zoo. The sign was nearly removed in 1949, but enough of an outcry led to it remaining, minus the last four letters, and with some renovation.


However, with upkeep now coming from the public purse, the sign was left to deteriorate. The four thousand lightbulbs that lit up the sign were not replaced – mainly because of the cost of electricity, but the originals had been stolen by then – and if parts of it fell over, or were subjected to arson, then so be it: the only replacement of a letter in its first fifty years happened in the early 1940s was when the sign’s caretaker lost control of their car, and took the “H” down the hill with it. 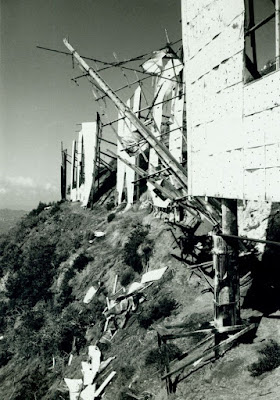 The state of Hollywood in the 1970s is often used to describe the comparative state of the sign from when it was built in 1923, not least because it no longer spelt “Hollywood”: it became more like “Hullywod” or, by 1978, “Ilywod.” With the old studio system of the previous half-century broken, Paramount Pictures remains the only major studio to be based in the Hollywood area, but many of the others left far earlier: Warner Bros and The Walt Disney Company are based in Burbank, on the other side of Mount Lee, separated from the bottom of it by the Ventura Freeway, with the others spread across Culver City, Studio City and, obviously, Universal City. Yes, the film industry sprang up in the Hollywood area over a hundred years ago to escape the enforcement of patents owned by Thomas Edison – a subject that needs its own article – but once they arrived, the scenery of California, and all it could be made to represent, film companies spread themselves around to take advantage of their surroundings.


However, the Hollywood sign made enough appearances in the backgrounds of films to become a unifying shorthand for the industry itself, as brash and brand new as the buildings around it, and the technology that brought in the money to build them. Fittingly, it was the figures of New Hollywood, with some of the old, that formed a trust in 1978 to rebuilt and look after the symbol that marked where they came together. The $250,000 cost of the new sign was split across nine donors: Hugh Hefner, head of the trust, paid for another new “H,” Alice Cooper donated the third “O” in memory of Groucho Marx, and Cooper’s record label, Warner Bros. Records, paid for the “O” next to it.


The Hollywood Sign Trust continues today as a non-profit organisation, working on behalf of the people of California, and contributions can be made to the upkeep and preservation of the sign at hollywoodsign.org – none of the money goes to illuminating the sign at night, because it has remained unlit since the bulbs were nicked. 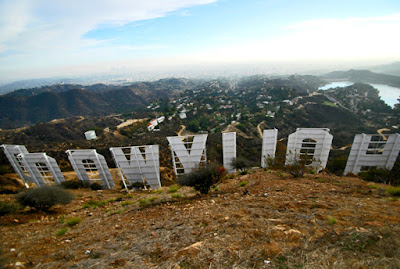