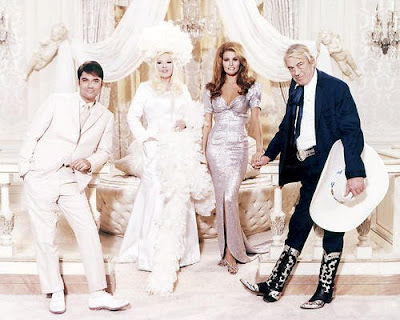 Once upon a time, I thought this was a good idea.


This is the first of a two-part exploration of why the 1970 film “Myra Breckinridge” is the worst film ever made. This first part explains why I think this is the case, and what it has done to me, while the second part will explain what I am going to do about it.


It has taken me nearly ten days to even begin writing about why I think this film is so bad, and it is because I had absolutely no idea where to start, and I needed to have my own reason for thinking so. As someone with a degree in film studies, six years of writing about film online, and a film collection that would have rivalled a Blockbuster Video store, if I’m having trouble trying to write about how bad a film is, it must be pretty bad.


The simplest thing to do is describe the plot. Myra Breckinridge is a film buff who arrives in Hollywood to overturn the degeneracy and method acting that has replaced the production of the films she so loves. In fact, she states her purpose as “the destruction of the last vestigial traces of the traditional man, in order to realign the sexes, decrease the population, with the intent of increasing human happiness, and preparing humanity for its next stage” – I should also say this film is a satire. Myra’s plan is to destroy her late husband Myron’s uncle, the former Western actor Buck Loner, who runs a method acting school on land to which Myron had a claim. She also aims to emasculate one of the students, Rusty, whose idea of how a man should act is to exercise and “ball chicks,” and to launch fellow student Mary Ann into her own career, despite only attending the school to see Rusty, marry him and start a family...

Oh, and Myra is Myron, having had a sex change two years earlier. In carrying out her plan, she will have complete mastery over both sexes, because that’s how that works. Myron also appears in scenes with Myra, making Myra appear less as her own character, “whom no man will ever possess,” and more as a woman-shaped golem carrying out a male fantasy. Myron is played by real-life film critic Rex Reed, who writes to this day for “The New York Observer,” and Myron will eventually be masturbated by Myra, before eventually killing her when she outlives her use. I’m sure that some people took their impression of transgender people from this film, and it does not help that the director, on the DVD commentary, states he thinks transgender people are pathetic are deluded.


Apart from the plot, “Myra Breckinridge” has a reputation for its incompetent production. The director and co-writer Michael Sarne, an actor and singer best known for the novelty song “Come Outside,” used stock footage of films from Classical Hollywood icons like Marilyn Monroe, Peter Lorre and Laurel & Hardy to act as a Greek chorus around the footage, commenting on the more modern action. However, in the hands of a director that spent days photographing a table of food, and who would leave the actors and crew waiting while he thought to himself, the stock footage would later be used to glue the plot together, leaving the unintended consequence of Laurel & Hardy being the funniest actors in the film, even when trying not to look at Rusty getting raped by Myra... yes, that happens too.

The only two redeeming features in “Myra Breckinridge” is the acting from Raquel Welch, playing Myra, and John Huston, the director of “The Maltese Falcon,” “Key Largo” and “The African Queen,” playing Buck Loner, who is referred to throughout as “Uncle Buck.” Both actors believe in their roles, and are making the most of their time. Many character and genre actors of the classical Hollywood period are also featured. However, Mae West, in her first role after twenty-seven years, playing the predatory talent agent and singer Leticia Van Allen, is camp as hell, when she needed to be louche – the tone of the whole film could be described that way.


Every film buff knows the drill: for every “Citizen Kane,” there is a “Manos: The Hands of Fate,” and for every “Vertigo,” there is a “Birdemic: Shock and Terror.” The canon of bad movie making has been explored deeply, especially online, a morbid fascination at the results of bad decision making, misplaced intentions, and pure incompetence. Every so often, a film will rise up that has the right mix of all the wrong things, and “Myra Breckinridge” has been celebrated as a disaster ever since a review in “Time” magazine began with: “’Myra Breckinridge’ is about as funny as a child molester. It is an insult to the intelligence, an affront to sensibility and an abomination to the eye.”

The prevailing opinion about “Myra Breckinridge” has generally followed the “Time” review, even without seeing it. A DVD was released in 2005, but is now out of print – my copy was bought on eBay some time ago, and despite my owning it, I originally based my decision on the film being the worst ever made on what I already knew about it. To make sure I knew what I was talking about, I watched it in preparation for this article, and had a sleepless night.


Not many films will ever be made about a transgender film critic, and for someone like me, an actual transgender film critic, I am horrified by the portrayal of Myra Breckinridge in her own film as a front for a man with very vivid fantasies – the original book, by Gore Vidal, was not like that, although she reverts back to Myron by the end of the story. The “it was all a dream” ending only makes it worse.


This film turned from something that could be dismissed, into something I must address. Therefore, I must meet this film at its own game – I must meet Myra at her own game. Time to enter Hollywood, and sort this out myself. 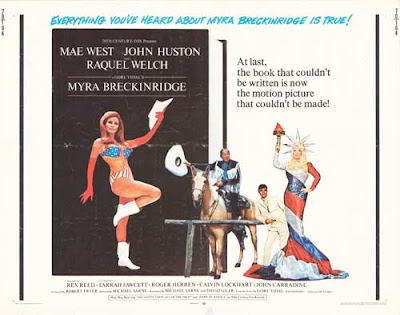