I WANT YOUR PSYCHO, YOUR VERTIGO SHTICK [160]

Alfred Hitchcock’s “Psycho” is regarded as the ur-text of the American horror genre, but its three sequels have proved harder to find, because of their being perceived as both inferior to the original, and, and as an obvious and poor answer to the rise of slasher film franchises like “Halloween” and “Friday the 13th”. However, Arrow Video have released “Psycho II” on DVD and Blu-ray, under licence from Universal Pictures, so I braced myself, and handed over some money.


As much as Hitchcock did not like the idea of sequels to his own films - although he had remade his British film “The Man Who Knew Too Much” in Hollywood, with James Stewart and Doris Day - “Psycho II” was always going to be out of his hands, especially by his dying three years before its 1983 release. Hitchcock had sold the rights to “Psycho” and his “Alfred Hitchcock Presents” TV series to Universal in 1968, with the film having already made $18 million at the box office – not bad for having spent $800,000 of your own money in the first place. Hitchcock became the third largest shareholder in Universal, which had been bought by his agent, Lew Wasserman, and his company MCA in 1953. As inevitable as a “Psycho II” was going to be by 1983, it was the perfect opportunity to both commemorate and capitalise on Hitchcock’s work. 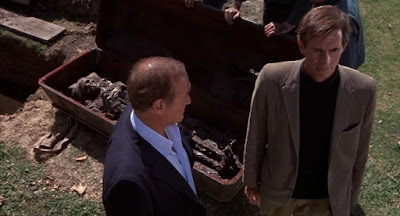 I am happy to say that this is a sequel worth watching. I was worried that “Psycho II” was either going to be some hackneyed, by-the-numbers horror flick, even though its director, Richard Franklin, had studied Hitchcock’s work, and had met with him during the making of “Topaz” (1969). Fortunately, it is also not the academic exercise of remaking the original that Gus Van Sant’s 1998 “Psycho” is known for being – just because you can now do the opening aerial shot of Phoenix, Arizona, that Hitchcock could not in 1960, due to technical constraints, doesn’t mean you should, whether you can do it in colour or not. Instead, what we have is a story that makes good use of the twenty-year gap in both the film’s events and of the public’s knowledge, while learning Hitchcock’s lessons in filmmaking without just copying them (although starting the film by replaying the original’s shower scene is a bit on the nose for me).


After twenty-two years in a mental facility, Norman Bates is deemed to be fit and well, and is released, against the wishes of Marion Crane’s sister Lila, who cannot believe that a murderer is not imprisoned for life – it is pointed out from the start that he was found to be insane, not a murderer. Initially working at a diner, he befriends and helps out Mary, who was thrown out of her boyfriend’s place. Norman and Mary take up residence back at his mother’s house and Bates Motel – the sleazy manager, played to greasy perfection by Dennis Franz, is first to die, at the same point as in the first film (after about forty minutes). 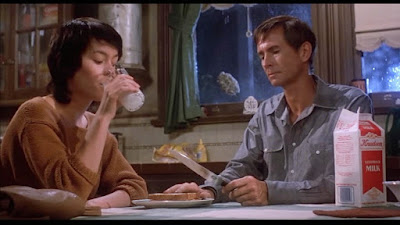 As the murders occur, Norman begins to see his mother again, which Mary sees as being part of his mental illness, something that could not make him a murderer. What is worse, Mary knows who is framing Norman: Lila, her mother, who wants him put into jail, using a “mother” costume secreted in the house. The climax of the film is that those who are implicated in the murders are those that have been shown to have been cool and calculating all along, and not the one shown to be almost incapable – fortunately, Norman is shown at the very end to have regained his equilibrium, and his mother, with the use of a spade, though not in the way you might think. As much as you think that “Psycho II” might be playing with notions of mental illness, the definition of what is “sane” is also shown to be different for everyone - as Norman Bates says in the original film, “we all go a little mad sometimes.”


The older Anthony Perkins seen in this film looks perpetually haunted, and this is to his advantage here, which is also the case for the returning Vera Miles as Lila Loomis, née Crane – his father is said to have died, presumably in an explosion with Michael Myers at the end of “Halloween II.” As Mary, Meg Tilly is the audience’s point of identification, but she is, and we are, ultimately proved wrong in the end, setting up 1986’s “Psycho III,” directed by Perkins himself.


The black and white of the original “Psycho,” and the stark string soundtrack, are traded for full colour and a lush orchestra, which could be seen as a way of muddying the waters. At the end of the first “Psycho” we got a nice summary of how Norman Bates took over his role as his own mother, but we don’t get anything so easy to understand here... but it sets up a sequel rather well. 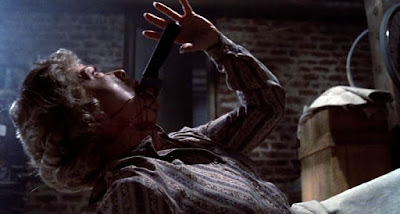