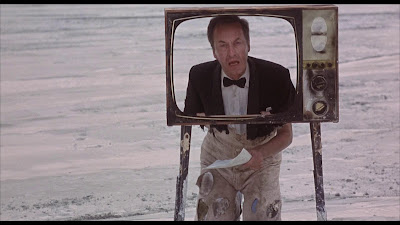 
After watching a film, you don’t normally need to watch the trailer to work out what the plot was, but I am glad I did it for “The Bed Sitting Room.”


In the trailer, Frank Thornton, playing “The BBC,” in its entirety, delivers what was the “last news.” He wears a dinner jacket, and seen through the frame of a television... but only the frame is left, and only the top part of his suit remains. It has been three, or four, years since the “Nuclear Misunderstanding,” or World War III, which lasted for 2 minutes 28 sessions, including the signing of the peace treaty. Thornton continues in a trailer-only voiceover that links together details: only twenty people are left in the UK, including Marty Feldman playing a one-man NHS; all electricity is generated by one man on a bicycle, powering a train on London Underground’s Circle Line; the Queen’s former charlady is now monarch, being next left in line for the throne; and the police, played by Peter Cook and Dudley Moore in a Morris Minor suspended from a hot air balloon, tells people to keep moving. Nuclear fallout is also causing some people to mutate, slowly turning an upper-class lord into a bed sitting room. 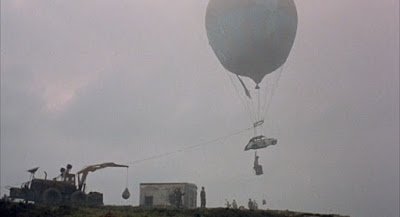 Of course, “The Bed Sitting Room” has all the above, but it plays like a collection of sketches, with a through line that involves a family whose daughter has been pregnant for seventeen months. Reaching the surface from their refuge on the Circle Line, and after being subjected to the harsh surroundings and bizarre people, Mother becomes a wardrobe, and Father becomes a parrot, later eaten because there is no food.


To say this all came from the mind of Spike Milligan, co-writer of the original play with John Antrobus, will surprise no-one. The original stage play was partly improvised, and director Richard Lester employed his usual scriptwriter, Charles Wood, to construct a screenplay that required a plot set in stone. However, “The Bed Sitting Room” is still “The Goon Show” as written by Samuel Beckett, an absurdist piece with something to say about the tendency to “keep calm and carry on” in the face of annihilation, given a British spin by continuing its institutions as well, as if nothing had happened – everyone keeps their hierarchies, positions and class in police, even when only one of each remains. Cast as the father of the family is Arthur Lowe, now inextricably linked as Captain Mainwaring of “Dad’s Army,” and even more of a shorthand as an Englishman type than ever. 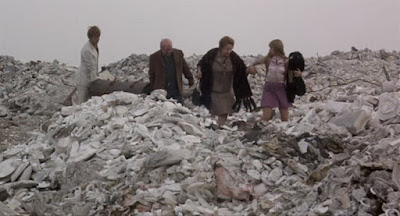 What is most amazing about this film, apart from the gallows humour that lost it money – the film did not travel far from the UK, rendering it a curious failure for years - is the scenery. There was a production designer, and “remnants” of St. Paul’s Cathedral and the Albert Memorial were constructed, but the mud, decay and detritus were all real, coming from a disused quarry, a pile of rejected plates sited next to a pottery firm, and the rubbish-strewn mess of a closed London Underground station required no set dressing at all.


For those who do not have the stomach for later depictions of a post-apocalyptic world – 1980s timepieces like “Threads” and “The Day After,” when the world really was in trouble – “The Bed Sitting Room” might have the humour to move you along, but you are left in no doubt that you are watching a kind of tragedy. 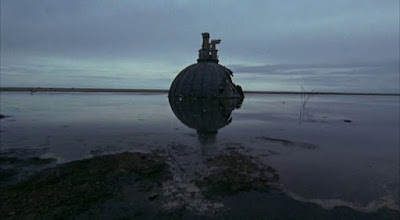