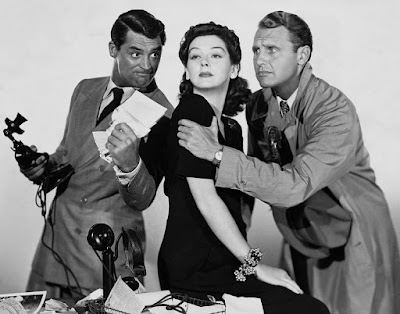 There is much to say about “His Girl Friday,” but its super-fast dialogue made me buy a blu-ray copy of it recently. However, its reputation as a masterful screwball comedy, starring Cary Grant and Rosalind Russell, underpinned by the professional production and direction by Howard Hawks, lauded as much of an cinematic auteur as Alfred Hitchcock, is told and retold in scholarly circles as an archetypal example of the “Classical Hollywood film,” displaying the types of characters, story and production Hollywood most often showed between the mid-1920s and 1960, when “Psycho” swept it all away.


The play on which “His Girl Friday” is based, “The Front Page,” by Chicago journalists Ben Hecht & Charles MacArthur, made as big a splash in Broadway in 1928 as Tennessee Williams and Arthur Miller would make twenty years later. The story, in which journalist Hildy Johnson is due to marry and leave Chicago, but is schemed into staying where he works best by his editor, Walter Burns, featured crosstalk between characters only seen on the street, and not on the stage – dialogue is written to be spoken over. 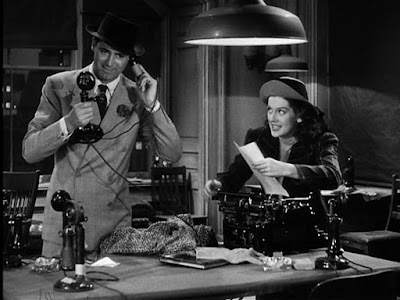 Coming the year after “The Jazz Singer,” “The Front Page” began to be seen as an ideal for how dialogue should be filmed, instead of the stagey way that accommodated the sound equipment, in addition to inspiring the new screwball comedy and gangster film genres. Despite this, the 1931 film of “The Front Page,” directed by Lewis Milestone and produced by Howard Hughes, was considered fast-paced for its time, but now appears normal, because we are so used to it.


By the 1940 release of “His Girl Friday,” Howard Hawks, who had directed the original 1932 film of “Scarface” for Hughes, had gained a reputation as a master of crosstalk, in screwball comedies like “Bringing Up Baby” and “Twentieth Century,” the latter also originally a Hecht & MacArthur play. He originally intended to just remake “The Front Page,” only faster, but when his secretary was reading Hildy Johnson’s part at auditions, Hawks liked the way the dialogue sounded, and changed the part to a female one, without changing the name. Rosalind Russell, apparently not even the sixth choice to play Johnson, confronted Hawks when she felt he was treating her like an also-ran, ironically proving she was perfect in the role. Meanwhile Cary Grant, cast from the start as Burns, used his innate charm to glide his manipulative bastard of a character through the film without losing sympathy, proving the characters were made for each other, romantically or not. 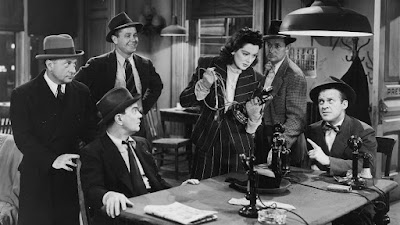 The dialogue in “His Girl Friday” has been timed at an average of 240 words per minute, almost twice that of regular speech. Charles Lederer, Ben Hecht’s protégé, also from Chicago, was tasked with writing additional dialogue, having written the screenplay of “The Front Page.” If it feels like dialogue is too quick to follow, or if there is too much talking over each other, it is because some of this crosstalk was written with the expectation that it could not be heard, with the important bits left clear. Sound mixing was still not yet possible, meaning live switching between off-screen microphones up to thirty-five times per scene was required. Ad-libbing was also encouraged, although Rosalind Russell employed her own writer to ensure she could compete.


“His Girl Friday” bears repeated viewings because everyone talks quicker than anyone can take in in a single sitting, fitting entire images into speech that would have been done away with if spoken more slowly: a favourite is how Burns sent out a plane with a banner saying, “Hildy, don’t be hasty. Remember my dimple. Walter,” which delayed the divorce by twenty minutes when the judge went out to have a look – Burns then points out that his dimple is still there, and in the same place.


(In case you wondered, the term “girl Friday” is not found anywhere before 1940, so many will have this film to thank for making their own words sound that bit wittier.) 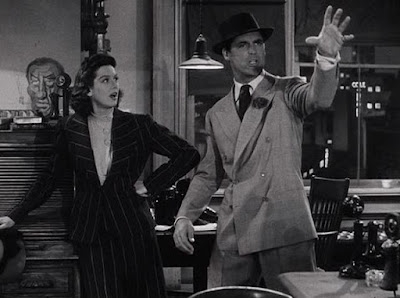