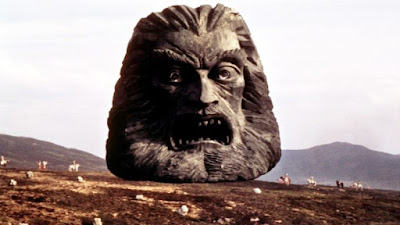 How is this for a career path: starting as a journalist in Southampton, John Boorman ran the newsroom of Southern Television, launching the evening news magazine “Day by Day,” a forerunner of the local news programmes seen across the UK. From there, he moved to Bristol, to make documentaries for the BBC. He was asked to make use of those documentary techniques to reproduce “A Hard Day’s Night,” except starring the Dave Clark Five. The resulting film, “Catch Us If You Can,” opened up an opportunity to direct a film in Hollywood, “Point Blank”, starring Lee Marvin. After the next film, “Leo the Lion,” was made back in the UK, Boorman’s next American film was “Deliverance.” In twelve years, Boorman made it to the Deep South, from the South of England.


So, by 1974, John Boorman could really make any film he wanted. However, because “Star Wars” was still three years away, there was no appetite for something on the scale of “Lord of the Rings,” which was his original plan. However, science fiction films involving big ideas, like “Silent Running,” “Soylent Green,” “The Omega Man,” and “Phase IV,” were in vogue. Meanwhile, Sean Connery was still in demand, but not on the same scale as when he was James Bond – Connery accepted the role of Zed in “Zardoz” after it was originally offered to Burt Reynolds and Richard Harris.

This set of circumstances made for a very odd, but prescient film. It is also a film that gives itself away with an opening narrative, not unlike the sort Universal Pictures did at the start of their “Dracula” and “Frankenstein.” We are told we are watching a satire, based in the future, involving an immortal person masquerading as a God. We are told the film is “full of mystery and intrigue,” which is just as well, as a full hour is spent building the world of a futuristic, yet medieval caste system, of which Zed is an anomaly – a lower order that stumbled upon the truth.


“Zardoz” is a deeply layered fable that concerns the holders of knowledge and power, who have become immortal themselves in order to keep the old world going, but have become corrupt in itself, fencing themselves off, with a literal force field, from those left to work the land. In a situation like this, the “Eternals” are shown to have inevitably become corrupt, save for one that, like a trickster god, experiments to create a group of people that keep those outside at bay, but one would be led to discover the ultimate point of their existence, which is to destroy the higher order – this sis where Zed comes in, led by his maker to discover that Zardoz is a trick, inspired by a certain novel by L. Frank Baum.


Because it is ostensibly a mystery story, writing anything about “Zardoz” involves some kind of spoiler alert – I neglected to enter one for fear of writing nothing at all. Any story involving an immortal person reintroducing the idea of death is worth a look, not least for the bizarre costumes here, including Sean Connery’s loincloth. Few science fiction films are more eccentric than “Zardoz,” but really should be. 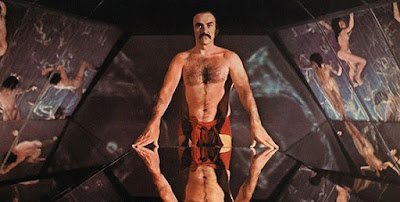