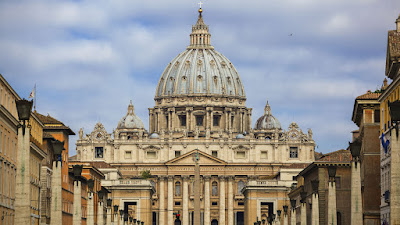 If you are constantly told you have something wrong with you, you will start to believe it. No-one has enough self-preservation to prevent such an insidious thought from infesting their mind. This is why treatment for mental health is so important, and why a stiff upper lip is only a sticking plaster.


This is why the idea of a Pride Month every June has become so important. People who were given no place in society, who were imprisoned if they did not live in darkness, have the right to celebrate their lives with primary colours, and remember those unable to join in.


I don’t care if businesses use rainbows in Pride Month to get the LGBTQ community to spend their money – if they didn’t think they were valid as human beings, then why appeal to them as consumers? It has become good business sense. Having said that, why take the banners down come July 1st – they should put their mouth where their money is.


This Pride Month, on Monday 10th June the Roman Catholic church waded unannounced into the festivities with a tract titled, “Male and Female He Created Them: Towards a Path of Dialogue on the Question of Gender Theory in Education.” Apart from proving that the secret of comedy really is timing, the document, from the Congregation for Catholic Education, mainly deals with how to approach the subject of gender identity in education, but starts by decrying gender theory,  and questions the intentions of transgender people to the point of implying they don’t really exist – it turns out they are misguided, and are just being “provocative.”


It should be clear that what I am going to do is let the text speak for itself. I was supposed to have done this a week ago, but I stopped myself. I wanted to choose my words carefully, even if the tract I was writing about did not. I am not going to denigrate someone’s beliefs, especially if they are held and practised sincerely, but if it turns out I don’t exist because of those beliefs, I have a right to reply, even if only to repeat those words back to where they came from.


It is hardly controversial for the Catholic church to state this – anything that threatens the traditional family unit, and the order of creation, was always going to get short shrift from them. In fact, the 19th paragraph of the tract – for reference, all the paragraphs were numbered – talks about how:


“...the view of both sexuality identity and the family become subject to the same ‘liquidity’ and ‘fluidity’ that characterize other aspects of post-modern culture, often founded on nothing more than a confused concept of freedom in the realm of feelings and wants, or momentary desires provoked by emotional impulses and the will of the individual, as opposed to anything based on the truths of existence.”


I didn’t know that King Henry VIII wanting a divorce meant the Church of England was founded in 1534 on postmodern principles.


Most reporting of the tract in the following week were based on this passage, while paragraph number 25, which mentioned the word “provocative,” in reference to the “display” of trans non-binary or intersex identities “against so-called ‘traditional frameworks’”:


“Similar theories aim to annihilate the concept of ‘nature’, (that is, everything we have been given as a pre-existing foundation of our being and action in the world), while at the same time implicitly reaffirming its existence.”


I thought more would have been made of when paragraphs 17  and 18 start talking about “the values of femininity,” how women have “a unique understanding of reality,” possessing “a capacity to endure adversity and ‘to keep life going even in extreme situations,’” while their “’capacity for the other’ favours a more realistic and mature reading of evolving situations, so that ‘a sense and a respect for what is concrete develop[s] in her, opposed to abstractions which are so often fatal for the existence of individuals and society,” such as when they are being patronised.


It has been nearly two weeks since the Catholic church released their document on gender identity,  and the initial furore over its publishing died down pretty quickly – it didn’t say anything that they weren’t expected to say, and its existence as a technical document on how to approach the subject in education is actually rather sound – paragraph 49 states that “Catholic educators need to be sufficiently prepared regarding the intricacies of the various questions that gender theory brings up,” while being fully informed about current and proposed legislation, consult with people who are qualified in the area, and for there to be a balanced dialogue on the subject.


If I was to see a balanced debate on transgender rights, I would be amazed. Yells of transphobia, of stifling debate and free speech, and any calls for increased rights for transgender people becoming an attack on women’s spaces, as if there weren’t already rules to deal with that, permeate social media. I really shouldn’t need to look at this, but it serves to know what you are up against, especially from those who feel they need to let you know what is going on their heads.


All I know is, as a transgender woman, or as a woman, or as Leigh Spence, my existence is not in question, thank you very much.
Catholic Church of England Gender Identity Gender Theory King Henry VIII LGBTQ postmodernism Pride Roman Catholic Church twitter