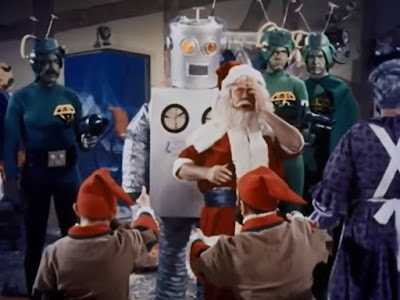 For my birthday this month, I received a DVD box set that contained the complete “Superman" cartoons from the Fleischer studio, and a selection of their “Popeye” shorts. The third disc, however, was as random as you can get.


If it seems odd my talking about the 1964 film “Santa Claus Conquers the Martians” just as summer is beginning, it must have been just as bizarre to make – to meet its November release date, it was filmed during July and August.


My copy could have been in a better condition – the film is largely in the public domain, having been abandoned once it served its purpose as an exploitation film. All Christmas films are exploitation films, hoping to take advantage of the time of year to make the maximum possible income, but what I didn’t expect was a plot that had another hallmark of the exploitation film: moral panic.


On Mars, the children are listless, watching television broadcasts from Earth, filling their minds with information. An elder is worried: “They never played, they never learned to have fun...” The children have “adult minds.” It is decided they need to learn to play again – taking their cue from the TV, they need to have a Santa Claus on Mars. Furthermore, it is decided that, “Earth has had Santa Claus long enough. We will bring him to Mars.” 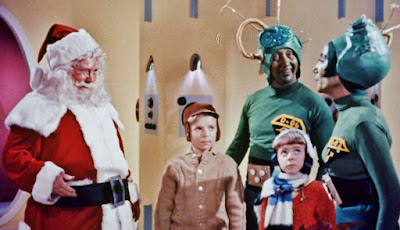 My memory of this film, among the first I have heard described as the worst ever made, featuring on “Mystery Science Theater 3000” and other shows, had mislaid the title: I thought it was named “Santa Claus Versus the Martians.” The idea of “conquering” makes it sound more substantially action-packed than it turns out. They appear to mean cultural impact instead, for once Santa Claus is on Mars, making toys in his automated factory, lamenting he only needs the work of one finger on his console instead of a workshop of elves, resentment grows in a few Martians, who sabotage the factory. A literal line from the film, spoken by a villain with a moustache that makes him look like Frank Zappa, is, “We cannot eliminate Santa Claus, but we can discredit him.” Fortunately, one Martian has become so enamoured with the whole set-up, they decide to dress up as Santa Claus, and becomes the new Martian version, allowing the original one to go home.


The children in this film are a little weird, and that includes the Earthlings, named Billy and Betty. They are the first to encounter the Martians when they land on Earth, and they are needed to distinguish the real Santa from all the fakes in the city. The Martians realise they must then be taken to Mars, so that no-one will know where Santa has been taken. They later become as listless as the Martians once where, due to homesickness – Merry Christmas. 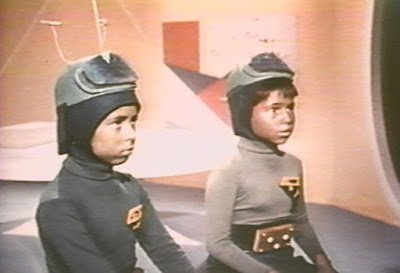 It has to be said – this is inconsequential fluff, with all the production values of a 1930s Saturday morning serial like “Flash Gordon,” let alone early “Doctor Who” episodes. The Martians all wear green rollneck shirts, tights and helmets, topped with antennas that have corned beef keys at the top. The sum of its parts, and the story, can be disregarded, to savour all the individual bits that make up the feature, provided you make it more than three minutes into the film: the most well-known actor in the film, Pia Zadora, is one of the Martian children, and her watching TV is the most reproduced shot from the film, suggesting most other viewers did not get much further. Zadora was later known for being the unlucky star of bad films like “The Lonely Lady” and “Butterfly,” but also appeared in John Waters’ original “Hairspray.”


My remaining notes are as follows: “Santa Claus Conquers the Martians” has the first depiction of a “Mrs Claus,” beating the Rankin/Bass animated special “Santa Claus is Coming to Town” by about two weeks, but because people have actually seen the latter one, this remains a minor discovery. Once the Martian UFO is discovered, the military scramble on Earth is played out entirely in stock footage, save for news announcements on TV – I guess American children love patriotism and jets. At the North Pole, Billy and Betty are attacked by a polar bear costume. The film’s composer, Milton DeLugg, is better known for his work for television, most notably for game shows like “The Newlywed Game” and “The Gong Show,” where he appeared with his “Band with a Thug.” The Martians’ secret weapon is Torg – “oh, not Torg,” – and is based on the stereotypical drawing of a man in a cardboard robot suit. 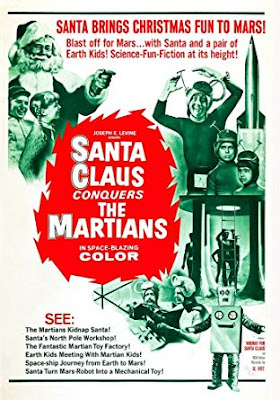