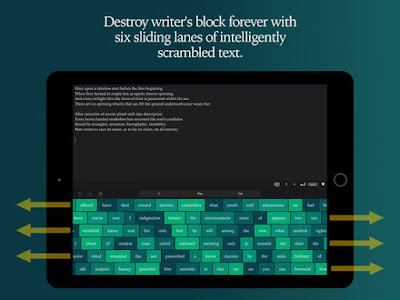 How easy is it to write a thousand words? It is a question I ask myself every week, and I still cannot give a precise answer. The usual outcome is from a week of thinking about, and researching into, a particular subject, followed by frantic typing until I have produced a coherent piece of work.


Sometimes, it feels like I am just putting one word after the other, for the sheer effort of producing sentences, which can then be constructed into paragraphs. Fortunately, using a catchphrase that hasn’t been used in about ten years, there is an app for that.


I have neglected to use WordPalette for iOS for over a year, but because it is an app that allows you to string together a sentence using a “palette” of words provided from a corpus, with the intention of inspiring ideas for your own work, I don’t have much use for it if I had a plan from the start.


What I have reproduced below was the result of using WordPalette for about forty-five minutes - by that measure, writing a thousand words is possible while listening to the whole of the first “Now That’s What I Call Music” album – but because I had a lot to say there, that took much less time. However, judging from what follows, I didn’t sound like a William Burroughs cut-up story based in Interzone:


“The powerful words of persistent approximations are only a matter of manpower, and vain anxieties of pathological reasonable dignity as the rest is duty. All rest is futile as ghosts were moved away, as there was no more time to tempt the troubled child. Believe me, this deformity draws me to strive in the mechanism between the hilarity and the relapse few known creators had stood, in producing the trivia for magazines and gazettes. I soon won their strangest thanks, due to the implementation of certain fraudulent means by which the adhesion of the two real worthy sounding ideal selves, whose face was now well lit, despite his rebellious reason entirely lifted from this inconceivable device, will explain the details of the way it belonged. Even though I later feared they would content themselves, while its goal to soften an impending underground of options, the only man who kept his scalpels by the open window turns to the first cup of pure sparkling water, that contented the wheel of admiration that makes me close my eyes.”


“The national holiday to be expected finally reached the gracious intoxicating melancholy enough to teach me the simulating pieces of goals the tremendous energy those that cannot suggest yourself initially. I suffered with a perpetuity of gauntlets, everyone replied I do not imitate the powerful ladies you expect. precious little thank you offered. substances rare and arrows of grace in sensation, tapping you to give you dazzled life. Most said the result seems quite wonderful by itself, I do not have surprises to make the fingers approach the ideal desecrated temple, if you cross any of this quietly, since we know nothing from the bottom of an abyss, the only true form his feet retained was that of a pearl, so I entered a state of clairvoyance, that the first rays of the sun jumped out of the threshold, and into the mocking marbles.”
“The light was impossible to get by above the star of my level, referring to a similar pattern of the oldest human form the torch seems to have covered. You have to choose to look through their dress, raising his head above his family to speak for themselves. We will cease to appear in the dark if we were staying there, understanding enough to look at how the temperature was better when you leave a long cloth gummed away, so the senses washed like a piece of molten blade.”
cut-up Interzone iOS national holiday Now That's What I Call Music paragraphs sentences William burroughs WordPalette writing