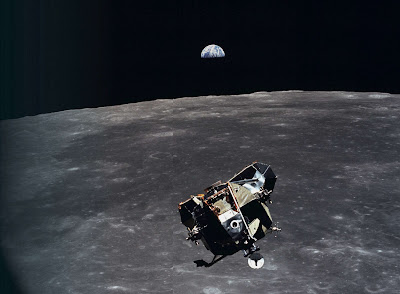 At a time when society and politics has never felt more tied to the ground, the pride and nostalgia engendered in us all by the Apollo 11 Moon landings fifty years ago was, for me, swiftly replaced with nostalgia for the world into which we thought we would step, but never really did. We are haunted by our past visions of the future we thought would come. (I have also covered “hauntology” here: link)


I am talking about everything from missions to Mars to meals in pill form, from lunar outposts to “The Jetsons.” The Space Age started in the 1950s, and appeared to be declared over when the last of NASA’s space shuttles were decommissioned in 2011, eight years after the last commercial flight on Concorde – regardless of the ticket cost, it is hard to accept that flying from London to New York in under three hours is something no longer possible. Meanwhile, space travel itself is becoming a private enterprise, under people like Jeff Bezos and Elon Musk, but I don’t see someone like Arthur C. Clarke, the science fiction writer that posited the idea of geostationary satellites, in their midst. 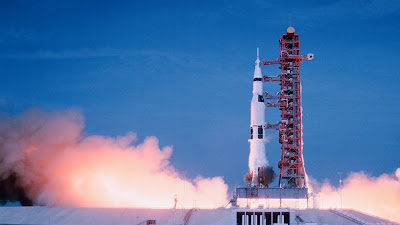 It is sobering to think that what launched humanity into space was imagination, rocket fuel and slide rules. The world was already transistorised by 1969, but the microchip had yet to open homes - the electronic pocket calculator was still a year away. Irrespective of that, and armed with rocket fuel and slide rules, humanity reached, well, Peak Humanity – it is difficult to top that sort of achievement without looking at what remains undone at home, as concerns over the state of the Earth became more important. It is hard to advocate a “Space Force” if you deny climate change at the same time.


Nationalism could also play no part, even in the space race with the Soviet Union, it was imagination that drove the United States to the Moon. In the May 1961 joint session of Congress where President John F. Kennedy stated the goal to land a man on the moon and return them safely, he said, “Space is open to us now; and our eagerness to share its meaning is not governed by the efforts of others. We go into space because whatever mankind must undertake, free men must fully share.” 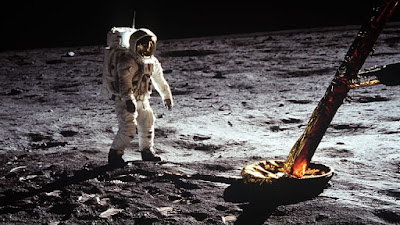 I have only one recurring dream, and it’s a big one. In it, I have been invited to fly to the edge of the atmosphere, if not into space – one day, I may have the chance to fly Virgin Atlantic. As the craft reaches the highest point in its journey, I look out of a window, and witness the curvature of the earth. I experience deep emotion, mixed with not a little megalophobia. My whole life flashes before my eyes, because the location of all that has ever happened to me is now within view. I close my eyes for the descent. I am quiet for the next few days, but when I eventually say something, it is to ask why we spend so much time looking down at our feet.


This dream makes far more sense that the one where someone keeps stealing my coat hangers, or when a giant spider clasps onto me as I say, “honestly, this just keeps happening.” These unconscious thoughts may even preclude me from being “the right stuff” for space travel, as if I was the only person who dreamed of going up there. However, as Kennedy had intended, we had to make preparations for the next big steps we wish to take as a race. As much as some don’t think that will be regarding climate change, it will be, but will a return to the space age be next? Perhaps, when we find a way of saying that humanity hasn’t yet peaked. 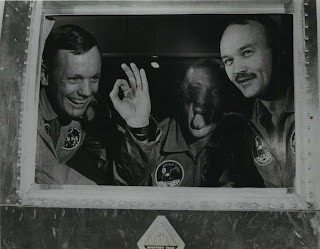