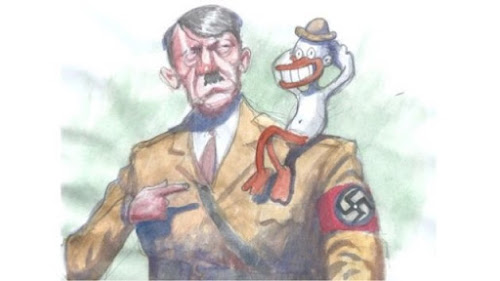 "I hope you've got a sense of humour," advises the writer, director and animator Bill Plympton, introducing his film "Hitler's Folly." The 67-minute mockumentary, presenting an alternate history about Adolf Hitler's career as an animator, has been presented, for free, at www.plymptoons.com since its release in 2016, because Plympton surmised it was not the sort of film that Hollywood would wish to make.

However, even this film recognises that Hollywood already put the boot in to Hitler. When the director of the "documentary," relating the story provided by a conspiracy theorist murdered at the beginning of the film, says, "is this the biggest pile of horse crap you've ever heard," as if you needed reminding, rationalising its existence with "Mel Brooks did this kind of thing with 'The Producers,' and he is perfectly fine... to this day, perfectly fine."

"Springtime for Hitler" is a complete piss-take that keeps its subject at arm's length, but "Hitler's Folly" invites you to identify with Hitler from the start, beginning with how, as a child, the saving an injured duck inspired Hitler to create "Downy Duck," a cartoon character that would become the flagship character of Hitlertoons, and the star of a four-hour animated retelling of Wagner's Ring of the Nibelungen. The evidence is presented as film fragments, drawings and photographs kept in a hoarded box by the conspiracy theorist, but in real life is Plympton's work, aping 1920s and 30s animation style, particularly Disney, of which Hitler is depicted as a fan, and doctoring photographs.

When I first heard about "Hitler's Folly," I thought Plympton would set up Downy Duck as being part of the Nazi Party’s propaganda campaign. What I was not prepared for, and what will test what people define as a joke, is how Downy Duck was Hitler's main plan all along. Hitler is depicted as setting up a film club, where the Nazi salute was a sign of community, and goose-stepping came from trying to walk on sticky cinema carpets. This led to the formation of "NACI," the National Animation Cinema Institute. Hitler then became Chancellor of Germany in order to secure funding for his Ring Cycle film, the deal hinging on President Hindenburg securing a drawing of Mickey Mouse from "Steamboat Willie." The mooted plans for a "Nazi Land," making too close a comparison with Disney, was where this film started to lose me, as the film tests when you will get fed up with it.

The conceit that the Second World War was to secure the rights to "territories" in which to release the film was bad enough, but the concentration camps are then described as artists' communes, where people "concentrated" on their work, and where people whose work wasn't good enough were taken away. A picture of the gate into Auschwitz was doctored to read "Arbeit Macht Frei - Ink & Paint Dept." Somehow, I watched this film to the end.

I guess Bill Plympton was relying on the absurdity of his tale bringing people through to the end - that it is so outrageous, it cannot possibly be taken seriously. Much about the Second World War that can be laughed at, but there remains much that cannot be, and those boundaries are maintained as a reminder to us all, with good reason. If "Hitler's Folly" was maintained as just that, a folly on the side, it would have been more palatable - to joke that a world war was waged to make a film, "conspiracy theory" or not, will remain in bad taste for a very long time.
Auschwitz Bill Plympton conspiracy theory Downy Duck Hitler Hitler’s Folly mel brooks Nibelungen Ring Cycle Springtime for Hitler Wagner