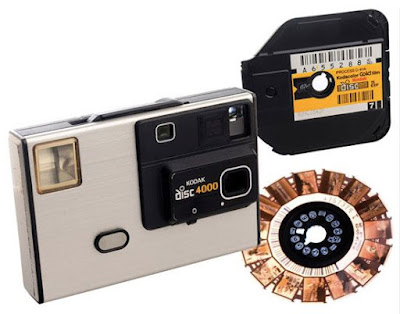 The first camera I remember using was a Kodak Disc 4000. Like most point-and-shoot cameras of the 1980s, there was little to go wrong: there was a single fixed-focus lens and an automatic flash, so all I needed to do, apart from removing the lens cover, was point and shoot.

It was our family’s camera, so I obviously will not be sharing any example pictures, but according to what I have read since, the picture quality achieved by the camera and film is supposed to be worse than I remembered.

Introduced in 1982, but not lasting much beyond the end of the decade, Disc film was Kodak’s latest attempt to package their film in a simple and fool-proof cassette, avoiding the hassle of unspooling film and winding it into your camera yourself, risking damage to the film and unwanted exposure to light if not done properly. Kodak had previously introduced the “126” and “110” film formats for their Instamatic camera ranges, encasing the usual supply and take-up film spools in a cartridge that the user could replace without ever touching the film, but replicating how the film and spools normally inside the camera made the cartridges necessarily bulky.

Disc film was completely different – encased in a flat cassette was a disc of stiff film, arranged in a circle of fifteen 10 x 8.5 mm image frames, not unlike a View-Finder toy, but not compatible with one. Simply open the back of the camera, place in the cassette, and start shooting.

The elimination of spools meant film could not be distorted or damaged by the film either being rolled up before or after taking the picture, or held down when the picture is taken. The tiny image size allows for a very short focal length of 12.5mm, and the lack of spools reduced the overall thickness of the camera: the Kodak Disc 4000 was only 3.2cm thick, which I didn’t see again until digital cameras became more popular.

Like the earlier formats, improvements in film production allowed for use of the same film in a wider range of conditions, and greater picture quality from smaller images taken - 126 film took image sizes of 26 x 26mm, and 100 film took 17 x 13mm images. However, because Disc cameras were not envisaged for anyone other than consumers wanting a simple camera, you could only buy standard Kodacolor film, so no experiments with Kodachrome, Ektachrome or black-and-white were possible.

Because the image size of Disc film was very small, the perceived lesser quality of pictures taken with a Disc camera appears to be a numbers game. They were considered of adequate quality when they were developed and printed onto 6 x 4 inch paper, but that was at a time when printing pictures was the only way most people saw their pictures, and 6 x 4 inches is often bigger than the screens on the smartphones where most pictures now taken often remain, regardless of how many megapixels were involved. However, the aspherical lenses used in both the cameras and the printing equipment, designed to make the most of the small image size, was an extra expense for developers that was often not spent, meaning many prints did not capture the quality of the original negative.

I guess our family was lucky with our prints, although the fact that Boots, the chemists that once had a network of film development centres in store, also sold Disc cameras under their own brand, probably meant they developed their prints properly. We later moved to using a regular 35mm film camera, either when cameras that automated the loading of standard film rolls became more common, or when the sealed lithium batteries inside the Disc camera ran down – like most devices now, we would have had to send it to a dealer or the manufacturer to replace them.

As if to prove that the 10 x 8.5mm Disc image does not mean you are looking at the film grain as much as the picture, there is the fact that pretty much everyone has seen motion pictures taken from an image size of just 10.26 x 7.49mm. Any time British television made a show on film, or ever filmed outside, whether it was “Doctor Who,” “Pride and Prejudice” or “Monty Python’s Flying Circus,” used 16mm film – the widescreen Super 16 format, used even today on HD-quality productions, is only 2.26mm wider. All you need to do is do your homework, use the right lenses at all times, and have the BBC insist on Kodak making progressively better film.