BUCKAROO BANZAI IS NOT JUST A MOVIE [260]

Very rarely do American blockbuster films try to defy explanation, but films with titles like “The Adventures of Buckaroo Banzai Across the 8th Dimension!” appear to be designed to do just that. It defies pigeon-holing, but because it defied the efforts of some to explain it, the film was only promoted to fans of “Star Wars” and “Star Trek” at the time of its release.

The film is based in a world where the celebrity of a polymath is unquestioned, for Buckaroo Banzai is a neurosurgeon, scientist and rock star, leading the band Buckaroo Banzai and the Hong Kong Cavaliers, its members also sidekick scientists that work for his institute. Banzai has mastered inter-dimensional travel, something that drove a previous scientist to insanity, but cracking entry to the 8th dimension reveals it has been used as a prison by an alien race, the Red Lectroids, which remains in conflict with another race, the Black Lectroids from the same planet, and wants to set off a nuclear explosion to annihilate them once and for all. The earth is, quite literally, at stake.

(Having seen “Buckaroo Banzai” some years ago, seeing how the Red Lectroids “successfully” hid themselves humanoids on Earth by all calling themselves John – “John Parker,” “John Emdall,” “John Small Berries” – led me to fill a database I was testing at work with fictional people named Jeff – “Jeff Muggs,” “Jeff Miggs,” “Jeff Over,” “Jeff Under,” and so on. A major problem was identified in the database when the majority of the Jeffs had disappeared overnight.)

The plot of this film is exactly what you expect from a 1980s blockbuster, still bathing in the radioactivity of the first “Star Wars” trilogy, but “Buckaroo Banzai” has a postmodern knowingness to it that is a little difficult to follow on a first viewing,  apart from the consciously artificial special effects. The world the film creates is fully realised and detailed, but not explained, because it doesn’t feel the need for it. All you have to do is accept the lead character is a man whose time is fragmented across many different abilities, sometimes within the same scene, and even the opening narration that explains this is someone who is destined to live his life “in all directions” is not enough to prepare you for that – no wonder he has his own comic book series, and that everyone knows who he is. That this is the case, not just for Banzai but for his “band,” which only becomes apparent as you go along. Everything you need to help you understand the film is there, on the surface, with character also explained though costume, but the surface is a tough one to crack.

The rich character histories and personalities come from an understandable process: Earl Mac Rauch first conceived the title character in 1974, but never finished many of the “Banzai” scripts – the final script, written over an eighteen-month period, folded in many of the remnants. Knowing this makes little scenes about why a watermelon is held in a vice in one room (“I’ll tell you later”), or Banzai coming across the long-lost twin of his ex-wife – hints at a larger story outside of the film, presaging the Marvel Universe, but without having the films to fill in the backstory. Likewise, trying to write something cohesive about this film is proving difficult to me, as there is so much to cover, except to say that only the villains act over the top, especially Christopher Lloyd and a “3rd Rock from the Sun”-level John Lithgow, and Jeff Goldblum is practically playing himself too. That is enough for most, but the film, to bridge the narrative gaps in the background, requires something of its audience not often found in American mainstream cinema: work. 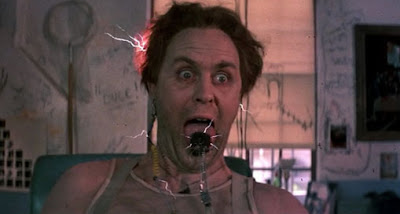