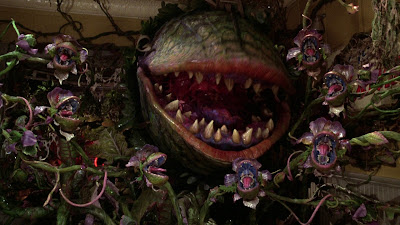 It seems an odd point to make that people are more accepting of alien invasion than they used to be, as if there has been a real-life test of this theory, but the reason this came to my mind was from watching Frank Oz’s director’s cut of “Little Shop of Horrors,” which might take even more of an explanation. However, when there is still only one “Close Encounters of the Third Kind” for every five films like “Independence Day,” or one “Arrival” for every ten “Invasion of the Body Snatchers,” there is a case to be made that people are now more willing to see a vision of an alien invasion that results in the eradication of humanity. No longer do the only outcomes for audiences have to be “we come in peace,” or the vanquishing of a foreign force.

Since 2012, “Little Shop of Horrors” has been available in two versions: the original 1986 released version, where Rick Moranis’s Seymour and Ellen Greene’s Audrey marry and move to the suburbs, just as in Audrey’s earlier dream, the alien plant Audrey II having been vanquished in the face of  a merchandising deal that would have put the plant in every home; and the Director’s Cut, restoring the original off-Broadway musical’s ending where Audrey II was cultivated, sold, and promptly killed everyone in a glorious display of destruction that completely horrified the test audience that had grown to love the characters over the previous ninety minutes, which nearly caused Warner Bros. to shelve the film before a more acceptable ending was constructed. Frank Oz later lamented the loss of the original ending by pointing out how, on the stage, the actors come out for a curtain call at the end.

The original ending, costing twenty percent of the film’s $25 million budget, was considered lost until 2011, when producer David Geffen remembered he had a copy of it – a previous DVD release of “Little Shop of Horrors” that included black and white footage without sound and completed effects shots was withdrawn after being released in 1998 without Geffen’s knowledge. When screened at the 2012 New York Film Festival, audiences accepted Seymour’s and Audrey’s deaths with applause, and cheered at the intricate model shots of a city being eviscerated by giant Audrey IIs. Now that Audrey II was properly connected to the 1950s alien B-movies that were contemporaneous with the film’s period setting, people could look at the unfurling destruction with the post-ironic knowingness that allows you to enjoy your own demise.

This is not the only time the ending of an alien invasion film was changed to be more accepting to audiences. “Phase IV,” the 1974 science-fiction film about a group of scientists shielding against a super-intelligent colony of ants, was to have ended with a surreal sequence of images where humanity is incorporated into the now superior ant race as it rebuilds global society. It is an extremely effective sequence, especially with the knowledge that Saul Bass, the graphic designer and storyboard designer for the shower scene in Alfred Hitchcock’s “Psycho,” is the film’s director. However, this ending was too much for the distributor, and “Phase IV” is cut off at the point where the scientists await the ants’ instructions. Again, the proper ending wasn’t shown theatrically until 2012.

Even the original 1956 “Invasion of the Body Snatchers” lost its original ending after it was topped and tailed with scenes that made the whole film into a long flashback. Instead of the police finally accepting Dr Miles Bennell’s story of giant seed pods being scattered in a road, bound for a city to replace people, the original ending should have been Dr Bennell’s frantic screams that “They’re here already! You’re next!”

The first time I remember watching an alien invasion film where humanity falls acceptably is “Mars Attacks!” What may have rendered this acceptable was the big names both in front and behind the camera: Tim Burton, Danny Elfman, Jack Nicholson, Danny DeVito, Tom Jones and so on, and other names you may want to see killed in the name of entertainment. Perhaps the genre tropes of science fiction are so prevalent that humanity losing is somehow a new experience, meaning the time for what was going to be called “the Intended Cut” of “Little Shop of Horrors” has now come - I’m not sure I’ll be watching the original cut for that very reason.