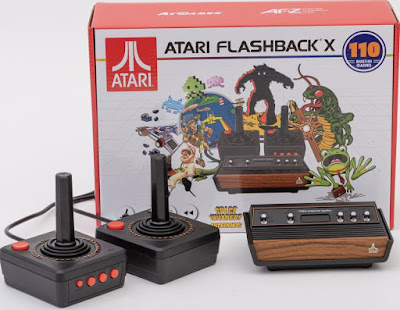 For what is both an exercise in nostalgia, and a way to continue exploiting old intellectual property, it is remarkable that the Atari Flashback series of games consoles, begun in 2003 by Atari themselves and continued under license by AtGames, has now lasted longer than the original production run of the Atari Video Computer System, later renamed the Atari 2600, on which it is based.

The original console was in production for a mere fifteen years (1977-92), withstanding numerous redesigns and cost-cutting, competition from far more advanced machines, an insatiable public demand for more complex and involved games, and the bankruptcy of its parent company.

But the games are amazing. Atari’s catalogue, along with games made for the console by other publishers – Pong, Breakout, Adventure, Battlezone, Centipede, Yars’ Revenge, Space Invaders, Pac-Man, Pitfall! – form a canon that proved the viability of an industry. The Fairchild Channel F may have been the first games console with interchangeable cartridges, but the 2600’s games had the playability to put the technology under televisions in millions of living rooms.

I have previously written about the Atari 2600, and how difficult it is to program [link], and I have walked through my reasons for buying the Nintendo NES Classic Mini, recreating a console I never played before [link]. I also used the Nintendo GameBoy to explain how something cannot be “retro” if you never experienced it before [link]. But the 2600? We never had one at home, but we had something similar. 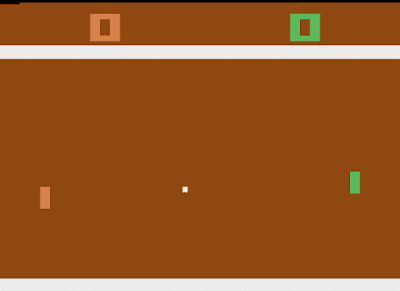 “Pong console” is a generic name for the glut of clones of Atari’s original Pong home console, moving elements around the screen to recreate different sports. We had one at home in the 1980s, probably imported into the UK under the Binatone or Grandstand name,  playing all games onto a green background, using orange joysticks hard-wired into a wood-laminated unit. The games were basic, but addictive. You did not require your imagination to get past the blocky screen resolution and rudimentary graphics – you are controlling only a short line on screen – because you have a clear objective: to get your pixel of a ball past your opponent’s line. A good game doesn’t need brilliant graphics.

The Atari Flashback X, the tenth in the line, is the first console in the series to closely replicate the original 2600 “Heavy Sixer” in miniature, previous versions being only similar in shape, their yellow buttons now replaced by more authentic silver switches for game select, game reset and difficulty levels – these options are on the control pads of newer consoles, but the Flashback uses that space on its player 1 joystick for further menu and game save features. The previous flashback model had an SD card slot to play extra games beyond the built-in games – a similar slot could have utilised the space replicating the 2600’s cartridge slot, but it is possible to update the firmware and play extra games via USB, if you’ve played through the 110 built-in games.

The games included speak for themselves – they have been endlessly released on every console going, even the latest PlayStation, X-Box and the Nintendo Switch, hilariously using high-power processors to recreate its “primitive” blocky graphics perfectly; they have been shoehorned into many hand-held and plug-and-play machines, and are baked into popular culture – even if you have never played “Adventure,” seeing the film “Ready Player One” knows you are playing a dot in a maze, sometimes carrying a key bigger than yourself. “Pong” is rote as far as video game history is concerned, although the 2600’s “Video Olympics” game, providing fifty-seven different variations on a theme, is played against a very pleasing Seventies brown background. However, the version of "Space Invaders" more closely resembles Taito's original arcade version than the 2600 version, thereby making it easier on the eyes, as the trickery required to produce the necessary bank of aliens on the 2600 produced an awful flicker on the screen. 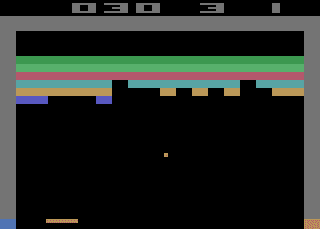 Before spending £70 on my Flashback X, I had considered trying to emulate the games on my PC – the basic graphics should be very easy to replicate – but I realised that emulation throws everything into the ether. Unless you have something to touch that is identifiable as having come from the original, you are not playing the game as intended. The satisfaction of flipping the “Reset Game” switch on the Flashback X, ready to play again, won’t have been the same if I had to select a key on my keyboard, or use my mouse to select “Reset” from a menu. Apart from the modern menu to select the game, I am playing a 2600, and the inclusion of two classic joysticks completes the effect...

...but the original 2600 also came with two paddles, essential for games like “Pong,” “Atari Circus” and “Breakout.” Because the latter game is my favourite so far, I decided to buy a pair of paddles – the Flashback series is compatible with original 1970s and 80s Atari controllers. I attempted to play “Breakout” with the joystick, but you can only go left a bit, right a bit – it isn’t easy to get your line where you need it to bounce the pixel ball away. The paddles, however, are perfect – you can nudge yourself along very slowly, or swipe your line along in one jolt.

As someone that rarely played video games, before finding that the type I like were the shorter, simpler games that were made for the 2600, I find that Atari’s paddles are the best game controllers I have used, and something I wish could have been used more widely on other consoles – if I knew about this as a child, I might have played video games more often. Like the volume control knob on a radio, the paddle houses a potentiometer. The effect on voltage produced by the paddle is registered in the console as a value that happens to also be used for controlling the horizontal position of an on-screen sprite, so game programmers can simply copy that value onto the screen to move your game piece along the screen, without any extra code to interpret what is coming from the joystick. I feel more connected to the game than when using a joystick, or a D-pad.

In short, I like the Atari Flashback X, I enjoy playing the games, but definitely buy some paddles for it. 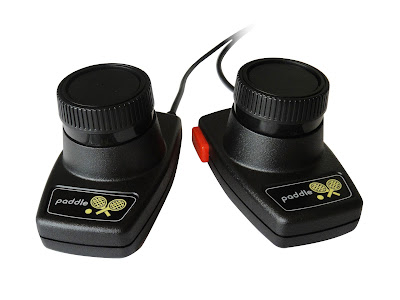