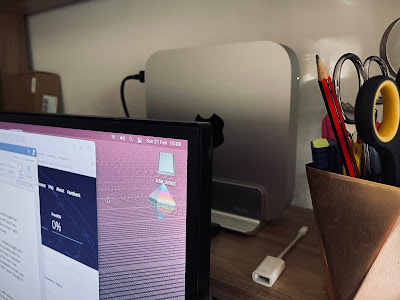 This article is my first to have been written on my new computer, and therefore about why I took what amounted to a calculated leap of faith into spending a large amount of money on a tool to help me work better and more creatively. The leap of faith is hoping that the most obvious decision to make was also the right one.

My current computer is a Lenovo tower PC, a former display model bought in December 2015 from PC World. Its processor, an Intel Core i3, is really only suitable for web browsing, and while it could probably cope with making basic videos, what I need now was something more professional – video and audio production, 3D graphics, photography, things that require as much processing power as you can find. I could have gone for a Lenovo ThinkCentre, or an HP EliteBook, but in the back of my mind, I knew that PCs are not the industry standard for what I want to do.

What I bought is an Apple Mac mini, the first desktop computer to use their new Apple M1 system-on-a-chip processor. The company is moving away from using Intel chips to using ARM-based processors made to their requirements, just like similar chips found inside iPhones and iPads, but tests users have made after buying them have shown they are so much faster at rendering video and processing on-screen graphics, Intel-powered PCs have difficulty keeping up with them – “snappy” is a word often used in reviews I have read.

There is never any shortage of people online telling you how good their products are, but what Apple seems to have done this time is create a desktop computer that can genuinely command the premium paid for their name. The new Mac mini replaces a model using a newer version of the same Core i3 processor in the computer I am replacing, but sold for twice the cost.

Once I finished setting up my Mac mini, I realised the premium is not just being paid for the computer, but for the escape from Microsoft Windows. After over twenty years of PC ownership, from Windows 3.1 to 10, ownership of a Mac appeared only to be for those that could absolutely justify their decision for buying one, whereas Windows-powered PCs are so ubiquitous, choosing to go elsewhere is to choose compromise.

However, in the light of what the Mac mini can offer me personally, staying with Intel processors and Microsoft Windows is its own compromise. Apple’s operating system, macOS, only has to work for the computers it is designed to work with, rather than needing to work with any and all computers, so the program only needs to take up as much space as is actually needed. A nice side effect of this tighter control, and other security measures, is not needing to buy anti-virus software.

I am taking the transition from PC to Mac slowly in case that, if a problem does come up, I can address it easily. For example, I can connect to work remotely on macOS, but we use Windows at work, and Windows expects you to use a two-button mouse, which Apple has never made. You have to supply your own mouse and keyboard for a Mac mini, but if you decide to buy an Apple Magic Mouse, remember to look up how to enable a virtual “right click,” or keep a PC mouse on standby, in case you have to go back to old ways.

It also turns out that software compatibility can be artificially enforced: I already bought and downloaded Microsoft Office 2016 for my PC, and thought I could move it to Mac until the next new version is released, but it turns out that the program for which I own no physical copy can only be downloaded for PC, which wouldn’t have mattered at the time. I had thought the Rosetta 2 program Apple provide to translate Intel-based programs to their new processor would bridge the gap, but no, because I didn’t originally specify “for Mac” when I bought it, I can’t have it at all.

The biggest lesson in switching computers has been the face that software is not really something you own anymore, as if it ever was. From just buying the licence to run a program you need, the standard is now to subscribe to a suite of them. The Microsoft Office issue was solved by subscribing to Microsoft 365, which was cheaper than I imagined – although this could be economies of scale due to how many people still need Word, Excel and PowerPoint – while Adobe’s Creative Suite is more expensive, although the likelihood is you are only buying the use of these because you need them for work, not to play with in your spare time. This has led me to explore what you can download for free, like the Photoshop competitor GIMP, and the 3D graphics program Blender, both open-source and provided by foundations dedicated to keeping them free to use. The Mac mini’s compatibility with iOS mobile apps means that LumaFusion, the video editor that has been used to piece together “Gatekeepers” videos for YouTube, can now take advantage of the faster processor.

I have never spent so much on a computer before this one, so I intend to make the most of what the Mac mini can offer me as someone who wants to expand what they can do creatively. With that hope in mind, no better computer has been made for the job.