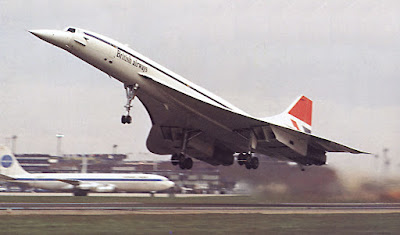 I have two reasons why I believe the idea of “the future” ended in 2003.

Firstly, Concorde was withdrawn from operation by British Airways and Air France. Supersonic passenger air travel has been a thing of the past for almost twenty years.

Secondly, the BBC cancelled “Tomorrow’s World,” a science and technology series that went out in prime-time, for a mass audience, demonstrating innovations from computers and the CD player, to the breathalyser and bulletproof vests.

You may argue that neither of these stayed viable – a downturn in air traffic following the 2001 terrorist attack on New York, and a change in demands of “luxury” air travel the Concorde could not be modified to meet; or a downturn in the ratings of “Tomorrow’s World,” along with new technology being incorporated into the BBC News show “Click,” formerly named “Click Online”.

Both have joined the museum of what was considered “the future” – an example of Concorde can be found at the Intrepid Sea, Air & Space Museum, alongside the Space Shuttle Enterprise; and “Tomorrow’s World” lives on as an archive used to mark where progress has previously been made.

Postmodernism does not aspire to the same earnest drive for progress that characterises modernism. Postmodernism is more concerned with how we see the world, and while its characteristics of fragmentation, collage and nostalgia do not require new material, anything that does come along will simply be added into the mix. Innovations may come, or refinements can be made, but there is nothing to suggest that the world of 2050 will be as radically different to that of 2021. “The Jetsons” was set a hundred years from when it was made, but as I sit in 2021, I don’t see flying cars and cities in the sky becoming commonplace in the remaining forty-one years left, although the robot maid could be a close-run thing.

However, I do not believe the de-emphasis of progress can be blamed on postmodernism. A kind of contentedness arrived in the Western world after postmodernism became part of the cultural background. Francis Fukuyama’s 1992 book “The End of History and the Last Man” hypothesised that the end of the Cold War in the previous year meant that liberal democracy had effectively won, and while events still occur, the progressive procession of “history” has ended. Meanwhile, “capitalist realism,” as popularised by Mark Fisher in his 2009 book of that name, takes a German term originally describing commodity-based art, redefining it as the notion that corporate capitalism and neoliberalism are now so dominant, there is no visible alternative to them. While it might not have been the kind of future we envisaged, it may well be the one we were destined to have.

This tends to be characterised by overt recycling in popular culture. For example, the music instrument manufacturer Roland sells a drum machine, the TR-8S, that for all the advanced programming and sampling features included, exists mainly as a new version of their original 1980s drum machines like the TR-808 and TR-909, working in similar ways to achieve the same effect, because music from the 1980s and 90s remain popular. I cannot honestly say what popular music will sound like ten years from now, because it endlessly refers to itself, perhaps from the moment Jackie Wilson’s “Reet Petite” became the UK Christmas number 1 single in 1986.

This may be the sort of conclusion that would still be made before the year 2020 began, as the emergency caused by Covid-19 accelerated the advent of human behaviour we still thought would be more commonplace in the future: working from home, communicating by video calls, the hastened end of brick-and-mortar retail. New medical innovations in vaccinations and personal protective equipment may be one thing, but these are innovations we needed and expected to occur. Envisaging a future of flying cars and unlimited leisure involves an element of force to enact the change, closing the gap between reality and the imagination.