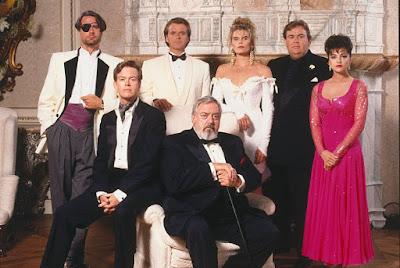 I set out to choose a film at random from Netflix – knowing I needed to write something, I started watching “Delirious” within three minutes of arriving home from a walk. I didn’t expect to choose a film where the premise is based on the lead character being a writer, and the script coming from writers with careers rooted firmly in comedy. Lawrence J. Cohen & Fred Freeman wrote the disaster film parody “The Big Bus,” and the twin-swapping comedy “Start the Revolution Without Me,” but their career is founded on their work in television sitcoms like “Gilligan’s Island”, “The Andy Griffith Show” and “Bewitched.”

“Delirious” stars John Candy as a soap opera writer, caught in a very high-concept Hollywood film-type situation: after hitting his head on his car boot lid, he wakes up inside his own creation. He wrote the show’s “bible,” setting out upcoming storylines, so he knows what will happen. He is secretly in love with the real-life star of the show, and is now in a position to do something about it. A character he could not get into the show suddenly turns up. If he is caught in a situation he doesn’t like, he can literally write himself out of it, using his magic MacGuffin of a typewriter, which was packed into his car. So far, so much a power fantasy – to save a character’s life, he writes that he can ride a horse, swapping it later for a Ferrari. 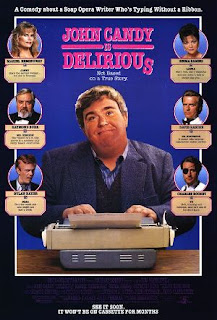 The real world apparently still has an impact – executive meddling creates an alternate version of Candy, played by Robert Wagner who, not knowing he is Robert Wagner, asks Candy why he is impersonating him. Other characters change, and Candy tries to type them back into shape. Out of frustration, he breaks his MacGuffin, meaning he has to use his smarts instead…

This is the mechanism of a “Truman Show”-like plot that has a US soap opera story slathered over the top – all people with vendetta, secret formulas and eye patches. I thought the object of Candy’s desires was meant to be a parody of Alexis Carrington, the “Dynasty” character played by Joan Collins, and then I found that Emma Samms, the actress playing the parody, played a Carrington as well.

What is also vague is how, when Candy wakes up, he can apply what he learnt in his dream state: he uses the Heimlich manoeuvre, he punches the writer changing his plot, and he finds the actress that should be in his show based hearing, in a deli restaurant replicated in his dream, the same order she made in that dream, and the resulting disdain from the deli owner – there is no basis for this, other than an incredible coincidence.

Having come across “Delirious” at random, would I recommend it to anyone else? If you like John Candy, you get John Candy playing the John Candy role: someone seemingly happier and more successful in life than others think he should be – see “King Ralph” and “Uncle Buck” for further details. However, for a film where he can get the girl by writing on his magic typewriter, there might be a little too much fantasy for some. 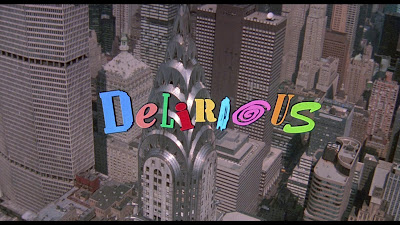