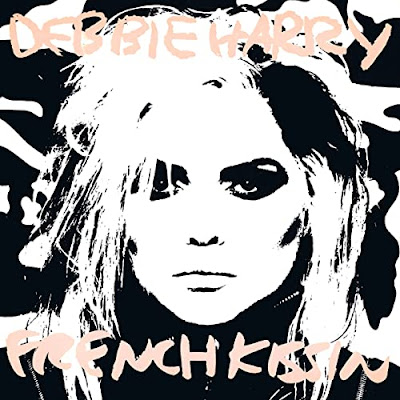 “French Kissin,” more often remembered as “French Kissin in the USA,” was the main single from Debbie Harry’s 1986 album “Rockbird,” made while the band Blondie was on hold. It was a success in the US, and Harry’s only top ten single in the UK.

However, while the song is good, it is not the main reason it is likely to be remembered these days, because the person that wrote it has become very successful in his own right: he had been a touring singer-songwriter for years before Harry recorded one of his songs, and he had since said his songs made sure he was kept out of the limelight, before he turned to writing scripts for television. 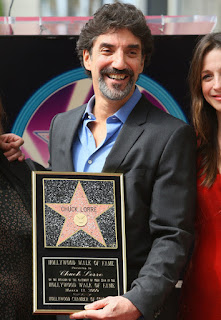 Chuck Lorre’s first scripts were for animated shows, meaning that, as I grew up, I would have seen episodes he wrote of “Heathcliff & The Catillac Cats,” “Muppet Babies,” ”Fraggle Rock,” and “Beany and Cecil” – there are other shows, but I don’t think they reached the UK, or I don’t remember them at all. As these shows date from 1984 onwards, either Lorre continued with songwriting without much success, or “French Kissin” was a few years old before Harry recorded it.

This then led to live-action sitcoms, with Lorre on the writing teams for “My Two Dads” and “Roseanne,” before he created his own, “Frannie’s Turn,” which only lasted for 6 episodes in 1992. However, this led to “Cybill,” “Grace Under Fire,” “Dharma & Greg,” “Two and a Half Men,” “Mike & Molly” and “The Big Bang Theory.”

These are all shows that have their charms but, especially when Channel 4 or ITV 2 screen episodes of them two or more in a row, they start to feel too much like stereotypical American sitcoms: with at least twenty-two episodes to be made each year, and with ten minutes in every half-hour swallowed by commercials, the plots, characters and jokes can become forced: forced to fit the time left, and forced to make their points quickly, with no breathing space. Chuck Lorre clearly knows the formula to producing a successful TV show, but successful TV show must also hide its workings. Also, I have never found the character or Sheldon Cooper funny, or relatable, and I never will. 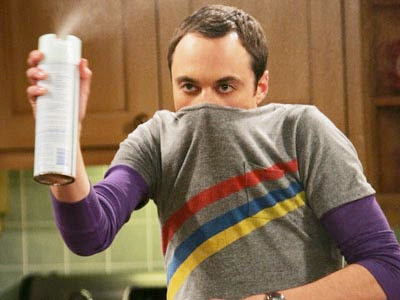 “French Kissin” is the only Chuck Lorre composition to have scored in the charts, but it is not his only successful effort in music. With Dennis Challen Brown, Lorre wrote the incidental music, and the horrendously catchy theme song, for the original animated series of “Teenage Mutant Ninja Turtles” – “heroes in a half shell,” and so on. And, yes, the spoken parts were by Lorre, which include, “We’re really hip!” and “That's a fact, Jack!” When you also know that the co-writer of the music for “The Real Ghostbusters” and “Inspector Gadget” was Haim Saban, he of the “Power Rangers” franchise, it does appear that the way to make billions of dollars is to start writing music for children’s TV shows. 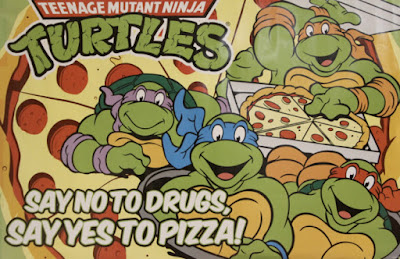 Posted by Leigh Spence at 05:34 No comments:

WHILE STROLLING THROUGH THE PARK ONE DAY [294]

[Above: The Dover Boys at Pimento University, or The Rivals of Roquefort Hall (1942), in the public domain.]

“But hold on, what’s this? It looks like an alert young scout. And that’s just what it is!”

The house style of the Warner Bros. “Merrie Melodies” and “Looney Tunes” cartoons took time to develop. By 1942, the director given the highest budgets, a certain Charles M. “Chuck” Jones, was asked if he could move his cartoons away from the style that had been cemented by Disney, and copied by everyone else. What they got was so different, Jones was nearly fired for it. By the end of the decade, it had changed the industry. 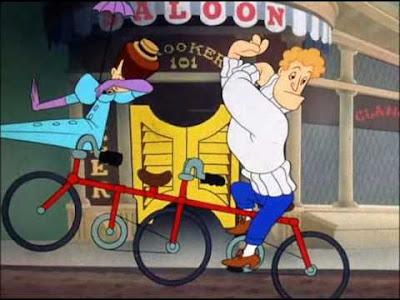 I wanted to start this by concentrating on how batshit crazy “The Dover Boys at Pimento University, or The Rivals of Roquefort Hall” is as a story, how unthinkingly stupid its characters are, and how much of a joy it was to come across it for the first time, but I needed to emphasise from the outset just how important it is in the history of animation – it is like enjoying listening to Jackie Wilson singing “Reet Petite,” then remembering that Berry Gordy, the song’s co-writer, used his royalties from Wilson’s recordings to launch what became Motown Records.

In 1942, American audiences would have got the joke of “The Dover Boys” immediately. It is a satire of “The Rover Boys,” a Boy’s Own-type adventure series set at a military school – one road from it leads to “The Hardy Boys” and “Nancy Drew,” and another to “The Famous Five” and “The Secret Seven.” Names are changed, from Tom, Sam and Dick to Tom, Dick and Larry; their collective girlfriend, Dora Standpipe, was Dora Stanhope; and the most Dickensian name goes to Dan Backslide, formerly Dan Baxter. The Victorian melodrama is played at the expense of the story: we have one-dimensional heroes, a one-dimensional enemy, and a damsel in distress, but from there, the film becomes an onslaught on your senses. 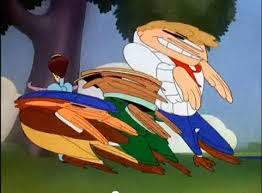 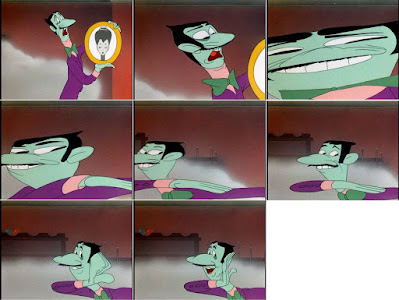 The Dover Boys themselves are introduced on bicycles, all at odd angles, while the narrator refrains from calling them jerks. Dan Backslide is literally green with envy (and probably nicotine), and has no indoor voice: “Confound those Dover Boys! They drive me to drink!” During a game of Hide and Seek, the boys hide across a park, and across the city, and when Backslide sees them, he announces, in a shout that continues to reduce me to laughter with how on the nose the line is, “Dora must be ALONE AND UNPROTECTED!” Even more, when Backslide sees a car, he announces, “a runabout. I’LL STEAL IT! NO-ONE WILL EVER KNOW!” What did I do to deserve the opportunity to laugh so much?!

This is before you even get to the visual gags: all dramatic poses are held in time until we go back to the characters, the Dover Boys punch themselves out in a triangle of fists, missing Dan Backslide, and Dora Standpipe is unnaturally strong, fulfilling her role in shouting “Help!” while throwing Backslide about, until he himself is crying for help – all the while, Dora could either break through the door she pounds on, or just unlock it. It is as if the story was left to replay for years, and now we have come back to it, it has glitched, or degraded, until only bits of it are left. 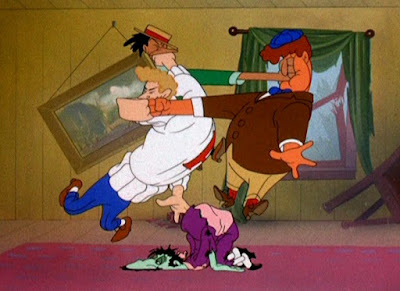 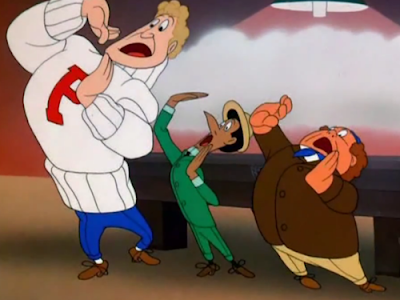 The animation is much more stylised here – it is more limited, and smear animation is often used between key poses, making for some brilliant freeze frame images. It may also be why, at approaching nine minutes, it is two minutes longer than an average Warner Bros. cartoon without any extra drawing. These techniques are more likely to be found in TV cartoons from Hanna-Barbera, and in cartoons from UPA like “Gerald McBoing-Boing,” and their Mr Magoo series, but it is generally acknowledged that, because Chuck Jones did it in “The Dover Boys,” everyone else could now follow.

However, for 1942, this may have been too far away from Disney for Warner Bros and producer Leon Schlesinger – they refused to release the cartoon, and Jones was on the verge of being fired, especially when the kind of satire presented could be misconstrued as coming from someone that either didn’t care, or could be taking advantage of their situation by submitting deceptively low-standard work. But because there was a release schedule to keep, and the onset of World War II meant extra talent would be harder to find, everything had to stay where it was. In fact, “The Dover Boys” was one of the last cartoons not to be war-related for a while, as Jones went on to help with the “Private Snafu” shorts for the US army, and all animation companies made war-related cartoons for a few years. 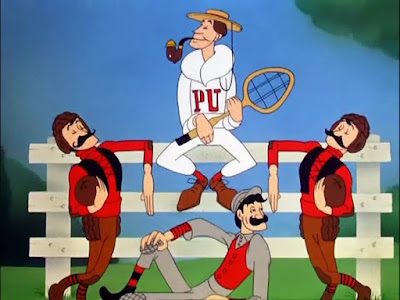 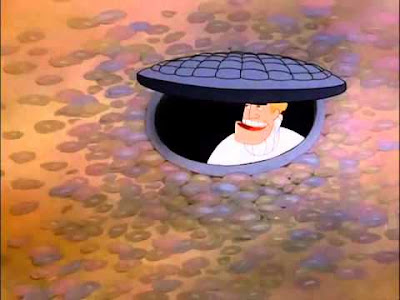 Put simply, just watch “The Dover Boys,” for animation history is remade from here onwards. It was the first time Chuck Jones found one of his own cartoons to be funny, and when you consider what was attached to his name afterwards, that says an awful lot.

Posted by Leigh Spence at 14:05 No comments: